Majesty of fall, in golden grass

Majesty of fall, in golden grass

Hikers walk along a path near Mount Mindung in late autumn, surrounded by tall pampas grass.

In these late days of fall, tall pampas grass fills the mountains to replace the autumn leaves to the north, while the band of red and yellow trees inches south, transforming the hills into splashes of beautiful color.

Meanwhile, under the crisp clear sky, the pampas grass shines and sways to the music of the wind, like nature’s orchestra playing a symphony.

Pampas grass is alive and well this time of year, and Mount Mindung (1,120 meters, 3,675 feet) in Jeongseon County, Gangwon Province and Mount Myeongseong (992 meters) in Pocheon, Gyeonggi Province are two popular places to see it.

There are two mountains named Mount Mindung in Korea. One is in southern Jeongseon County and the other is in Pocheon, Gyeonggi Province. For pampas grass, the one in Jeongseon takes the cake. The name literally means “bald mountain,” and it suits these peaks well, since they’re completely bare, with no trees in sight. The crown of Mount Mindung in Jeongseon County even has what could be called a “bald spot,” ringed by brown “hair” that waves and crackles in the wind - a circle of pampas grass.

The end of October to early November is the best time to climb this mountain, but a hike to the peak during snow season can also be very rewarding. The climb is not too difficult, starting off at 600 meters above sea level, with a train ride available for families. Mount Mindung’s tanned, bald head is visible to the far north from Jeungsan Station in Gangwon Province, and a 1.5-kilometer (about a mile) walk along Dongnam Stream takes you to the trailhead. Cross Mureung Bridge to the right and walk parallel to the tracks for about 10 minutes, and you will soon find yourself standing under the railway. Walk another 50 minutes, and you will reach a trail leading into the forest. Forty more minutes, and you’re at the peak, known as Duuibong, famous for its views of royal azalea fields.

The climb down the mountain is a brisk walk along the northern ridgeline toward Samnaeyaksu Spring. From there, take the left-hand path into the forest. When you are done with the climb, you should arrive at Byeoleogok Station. The entire journey takes about six hours, though the trip down to Byeoleogok Station could be a bit challenging for beginners.

Four-wheel railbikes run on 7.2 kilometers of the now-abandoned Jeongseon line tracks, at speeds of up to 30 kilometers per hour. Weekend rides are available by online reservation only, at www.ktx21.com. The fee is 18,000 won ($16) for two or 26,000 won for a group of four. Other sites to visit include Kangwon Land (1588-7789), a leisure center built to revive the old mining town. The facility includes a casino, hotel, golf course, the High 1 ski slopes and a theme park.

One local specialty is gondeure na-mulbap (rice with herbs and vegetables), once distributed to relieve famine. First, the herbs and vegetables are cooked with the rice, then perilla oil and seasoned soy sauce are added before the dish is served. Though slightly bitter, the rice is great for cutting through the grease urban climbers are used to. Local establishments serving the dish include Gukhwang (033-563-9967), Daraeddeul (033-563-5840) and Dongbakgol Sikdang (033-563-2211).

Buckwheat noodles in cold soup is another local favorite. The local natives call the dish “nose ridge hitter” because the noodles are very elastic and sometimes spring up and hit the diner in the nose after a particularly enthusiastic slurp. The soup is boiled with anchovies, cabbage, pumpkin and potato in soybean paste. Donggwang Sikdang (033-563-3100), near Jeongseon Station, is famous for the dish.

Myeongseong is a mountain near Seoul with historic ghosts. This was the location of the last stand of Gung Ye, the ruler of a short-lived Korean kingdom (901-918) who died while fighting to protect his state from crumbling.

Born as a member of the Silla royal family, at one point he was a captive of the founder of the Goryeo Dynasty, which ruled Korea from the 10th to 14th centuries.

Gung Ye eventually made himself a king in 901 and named his state Later Goguryeo. But Wang Geon, the founder of Goryeo, tracked him to this mountain after Gung Ye lost a major battle. Legend has it that the sound of Gung Ye lamenting his defeat was heard across the mountain.

The village of Yidong-myeon in Pocheon near Mount Myeongseong is well known for its delicious galbi, or barbecued ribs, and makgeolli, or traditional Korean liquor.

There is a natural cave at Mount Myeongseong where Gung Ye and his 200 remaining men are believed to have hid while fleeing from Wang Geon’s army. People call this Gung Ye Cave.

Myeongseong is also called “weeping mountain,” because Prince Ma Ui of the Silla royal family visited it after his kingdom lay in ruins. Legends say that people heard the mountain itself weeping when the prince arrived.

There is only a little pampas grass here, but the view of Sanjeong Lake from the mountaintop is fabulous, attracting scores of climbers during weekends.

The trail begins at the Sangdong parking lot. After a 10-minute walk along a gravel field, the trail leads to Biseon Falls. Here the real hiking starts. Some 30 minutes into the valley sits Deungryong Falls, named after a legend that says a dragon appeared out of thick fog and flew up into the sky here. The beauty of this waterfall is often compared with the famous Peach Falls at Mount Seorak. 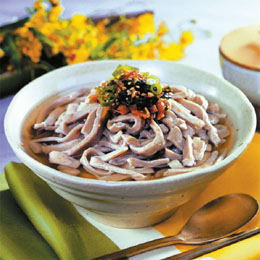 Buckwheat noodles in cold soup with anchovies, pumpkin and potato in soybean paste is a specialty of the Mount Mindung area.

Try taking the trail to the right of the falls for a gentler slope. Twenty minutes up, you will reach the pampas grass, best seen as the sun pours down on it in the high afternoon.

For a nice view of Sanjeong Lake, climb another 20 minutes to Samgakbong Peak, then start your descent. The entire journey is 6.5 kilometers and takes about three hours.

Mount Myeongseong is just two hours away from Seoul, making it the perfect site for a family climb.

A theme park near Sanjeong Lake boasts a pirate ship amusement ride and bumper cars, along with other rides. Also nearby is Jain Temple, founded by Wang Geon, the founder of Goryeo, under his pen name. It burned down in a forest fire but was restored in 1227. It was destroyed again during the Korean War in 1950. Today’s buildings date from 1964.

About an hour’s car ride from the temple is the Hantan River, Sundam Valley and Sambuyeon Falls. The Sanjeong Lake Hanwha Condominium (031-534-5500) there offers spa baths for 8,000 won and a 30-minute traditional Chinese foot massage for 30,000 won. 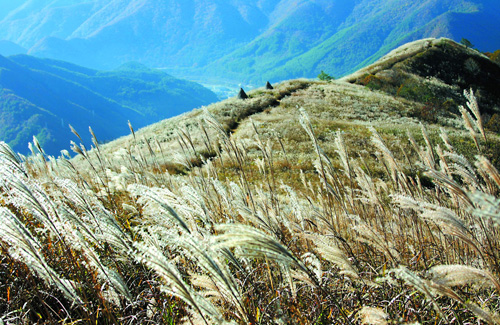 Galbi, marinated barbecued ribs, is a Korean delicacy, and about 30 minutes from Sanjeong Lake, the village of Yidong-myeon in Pocheon County is packed full of about 60 restaurants serving the sumptuous dish, concentrated around the streets leading from Jangam-ni and the Baekun Valley.

One of the most popular eateries is called Songsine Galbi (031-535-4872), meaning, simply, “Song Family Galbi.” Thanks to its location near Heungryong Temple on Mount Baekun, it’s usually full of hikers. The place is 30 years old and started off as a small studio. The marinated sauce is all-natural. Acorn-starch jelly, non-spicy kimchi and assorted vegetables are served as well. One serving costs 24,000 won. Songsine Galbi also serves cold noodles in chopped pickled radishes for 3,000 won.