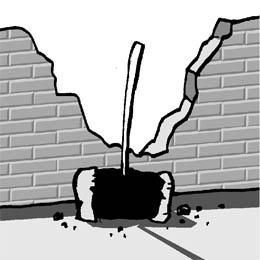 The French philosopher Blaise Pascal remarks in his book “Pensees” that seemingly trivial occurrences we might not even be aware of affect geopolitical events.

He famously wrote, “Cleopatra’s nose, had it been shorter, the whole face of the world would have been changed.”

Those who support the historical view that history is the continuation of accidents based on causality rather than reason often side with Pascal.

Had it been shorter, the thinking goes, Mark Antony would not have fallen in love with Cleopatra, deserting his family; the Battle of Actium between the forces of Octavian and the combined forces of Mark Antony and Cleopatra would not have taken place; and Octavian could not have consolidated enough power to be enthroned as the first emperor of the Roman Empire.

These events, and their subsequent ramifications, were conjured into existence because a man fell in love with an Egyptian queen.

Of course, it is not possible to explain history through accident alone. If we inquire into antecedents, accidents are prone to be the product of causality.

For instance, the democratization movement in Korea depended on many prior events. It’s fairly certain that one such event was the attempt to cover up the cause of Seoul National University student Park Jong-cheol’s death in January 1987 by saying, “He died instantly when an interrogator hit the table.”

Therefore, E. H. Carr, who said history was an endless dialogue between the past and the present, rejected the view that emphasized the role of historical accidents in his renowned work, “What is History?”

However, accidents certainly play a role in history.

For example, the 14th-century Ottoman Sultan Bajazet stopped his expedition to central Europe because he was afflicted with gout.

Historian Edward Gibbon wrote that the incident showed that a tumor on one’s muscle could prevent or postpone the miseries of a people.

Then there’s the fall of the Berlin Wall, the 20th anniversary of which was celebrated on Monday, which was detonated by a slip of the tongue by a spokesman of the East German Communist Party.

When reporters asked the spokesman when East Germans would be free to travel to West Germany, he inadvertently said, “Right now.” The East Berlin residents rushed to the wall with hammers and axes, bringing the wall down.

Of course, the fall of the Berlin Wall must have a historical inevitability, but it was due to a historical accident that the wall came down on that day in such a dramatic way.

And this is the reason why history is so fascinating. How boring history would be if it were not for historical accidents, instead running only on necessity.