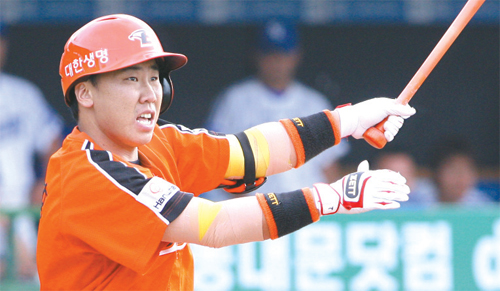 Free agent Lee Bum-ho, could have a new suitor by the end of the week.

His former teams, the Hanwha Eagles and the Lotte Giants, are showing a lot of interest in the 28-year-old third baseman.

Several Nippon Professional Baseball teams, including Chiba Lotte - which signed Lee’s former teammate Kim Tae-kyun to a mega-deal earlier in the week - the Yomiuri Giants, the Hanshin Tigers and the Yakult Swallows are said to be showing strong interest in Lee, too.

“I will decide by the end of the week whether to sign with a Japanese club or to remain in Korea,” Lee said. “If the opportunity does not present itself, I will start negotiating with KBO clubs.”

Although Lee wants to play in the NPB, he does not want to get tied up in long negotiations. Hanwha Eagles have been keen on re-signing the free agent but Lotte Giants, who are need of a third baseman, are also interested. As Lee and Kim Tae-kyun were considered the big names in the current pool of free agents, other players are also keeping close tabs on proceedings.

“I have no intention of signing a low offer just to play in Japan. I am interested in a two- year deal in the neighborhood of 300 million yen [$3.36 million],” Lee said.

The deal Lee is interested in would net him a 100 million yen signing bonus and an annual salary of 100 million yen. Such contracts are reserved for some of the top ranking overseas players in NPB. Lee’s latest statement comes at the heel of the three-year 700 million yen deal Kim signed with Chiba Lotte last week.

NPB clubs began negotiations with free agents at the start of this month. In order to secure a contract this month and the type of figures Lee is asking for, a player has to be ranked among the top overseas free agents. The longer it takes Lee to find a suitor, the less likely he will be able to reach the deal he wants.

Talks between Hanwha officials and Lee fell through on Nov. 12. According to Hanwha officials, Lee was offered a four-year deal worth 4 billion won, excluding incentives in their latest talks.

Hanwha will have another shot at negotiating with Lee on Dec. 3.