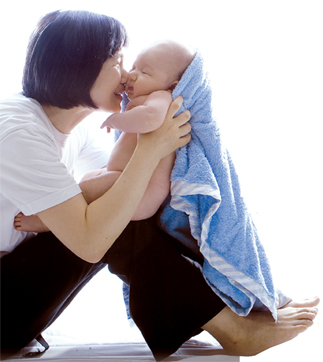 Jin Sun-ah, who is 41, holds her infant son, Kim Hyun-woo. An increasing number of women like Jin are delaying childbirth until they’re older. Others are limiting the number of children they have or opting not to conceive at all. [JoongAng Ilbo]

On a typical day, about 30 children can be found at the Little Sun Day Care Center in Gangnam District, making crafts, playing with toys and running around with unbridled energy.

The center, however, often feels eerily empty, as it was built to accommodate a much larger number of little ones.

It’s an interesting dynamic. Little Sun, after all, is located near an apartment complex consisting primarily of middle-class and well-to-do residents, a segment of the population that in other countries typically pumps out plenty of children. But the scene in this area is emblematic of a larger trend playing out across the country, one that has become a major issue for Korea going forward.

Government officials are grappling with what to do about the country’s low birthrate, unveiling a host of new measures yesterday meant to help prop up the country’s population. If those efforts fail and the trend continues, however, there could be major repercussions for future generations. A continuation of the low birthrate would ripple through all aspects of life, eroding support for older generations, stifling economic growth and likely leading to the closure of many schools and other community organizations. 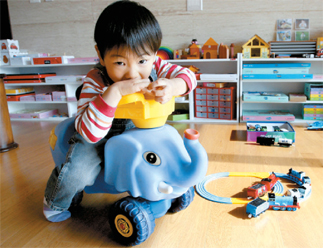 Suwon resident Ji Dong-kyu’s 4-year-old son, Sung-jae, takes a break from playtime to pose for the camera. Due to the high costs of raising children in Korea, Ji has decided not to have a second child. By Ahn Sung-sik

At the heart of the problem is a surprising segment of the population: the middle class. In many countries, the more money families make, the more children they have. But that’s not the case in Korea, where the middle class actually has the lowest birthrate in the country.

“In most cases, birthrates rise with an increase in income,” said Lee Sam-sik, a researcher at the Korea Institute for Health and Social Affairs. “The increased income means more can be invested in raising children, and this usually means an increase in the birthrate. But in Korea, the numbers show a sharp decrease among middle-class families.”

The apartment complex near Little Sun provides a window into the country’s low birthrate.

Households in the complex consisting of married women between the ages of 30 and 35 have an average of just 1.44 children, according to a survey of residents conducted by the Gangnam District Office. Six out of the 100 questioned didn’t have any kids at all.

“It’s very rare for a family in this area to have three children, as most just have a single child or two,” said Kim Hyun-jeong, an instructor at Little Sun Day Care Center. “Compared to other neighborhoods, the number of children per household is fairly low here, and it means day care centers suffer as a result.”

In contrast, another apartment complex not too far away that has more families in the low-income bracket averages about 1.77 children per household, according to the Gangnam District Office.

In Korea, the high-income segment of society produces the most children per household, followed by low-income families and then the middle class. According to a recent study of 5,000 married women between the ages of 20 to 44 conducted by the Ministry for Health, Welfare and Family Affairs, the average monthly income per household among those who participated was 3.3 million won ($2,867). The low-income families that make 1.98 million won or less a month boasted 1.63 children per household. Those in the bottom part of the middle class, who make 1.99 million to 3.29 million won a month, averaged 1.68.

“The current phenomenon of a low birthrate among the middle class is similar to the situation in Greece, Spain and Italy,” Lee, the researcher, said.

Talk to younger middle-class couples, and the reasons they give for waiting to have children or limiting the number of kids they conceive are often the same.

Ji Dong-kyu, a department chief at the National Pension Service who has a 4-year-old son, said he doesn’t plan on having another child because of exorbitant educational costs and a lack of trustworthy child care centers for babies. 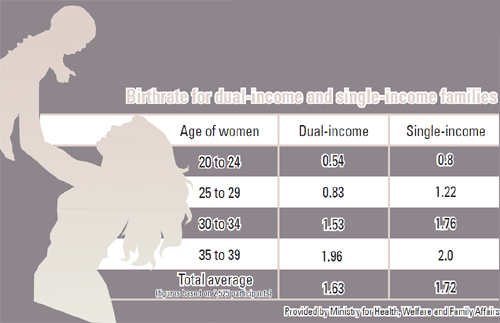 “My wife, who works as a civil servant, and I bring in a monthly income of about 4 million won,” Ji said. “However, we figure the educational costs for our son will only increase as he grows up, and that is why we decided to settle at one child.”

The low birthrate among the middle class is tied to the fact that more women are pursuing careers in the professional world rather than just staying at home and raising kids. These women often find it hard to juggle a job and a family, and they aren’t exactly ready to send children off to day care centers while they work.

So, many families are waiting longer to have children - or deciding not to have any at all.

According to a recent Ministry of Health study on 2,525 married women between the ages of 20 and 39, dual-income households had an average of 1.63 children, while single-income households had a higher average of 1.72. Additionally, ensuring that a child gets into a good college is now an expensive proposition, as families typically must spend gobs of money on additional private classes.

The current situation is an about-face from just a decade ago. The government encouraged abortion between the early 1960s and mid-1990s to try to control what at the time was a relatively high birthrate.

Today, the Korean government has to resort to a birth promotion policy to encourage women to have more children.

It’s now scrambling to come up with additional measures on this end. Yesterday, the Presidential Council for Future and Vision announced its plans to deal with the low birthrate, detailing its intention to take a harsh stance on abortion, which is technically illegal but occurs throughout the country. The government, among other moves, will look to aggressively enforce the current law, which stipulates that both doctors who perform abortions and women who have them can receive up to two years in prison. Abortion is only deemed legal if the mother’s life is in danger, if women have been sexually assaulted or if they have genetically based mental or infectious illnesses.

Ministry of Health data reveal that only 4 percent of abortions carried out last year fall under those categories. In fact, an average of 450,000 babies are born in Korea on an annual basis, while 350,000 abortions are carried out, according to ministry data.


Focusing on the middle

To date, most of the government’s support programs and benefits for childbirth - such as a monthly allowance for raising kids - have been geared toward low-income families. Middle-class families can only receive support fees up to three times, and the total amount per instance is limited to 1.5 million won. Such restrictions have lowered the number of families who received support by 31 percent since 2006. The dip stems from an increase in dual-income families who exceeded the monthly income limit.
Lee Yoon-shin, a 31-year-old office worker, falls into this category. She gave birth to a son two months ago and is currently on maternity leave. Lee and her husband had difficulty conceiving, and they tried artificial insemination and other methods. It cost the couple over 10 million won, yet they did not receive any support from the government - something that would discourage many couples from even trying.

“Each time we barely cleared the minimum limit and hence were not eligible for financial support,” Lee said. “I think the middle class has been placed in a dead zone.”

Gill Greer, the director general of the International Planned Parenthood Federation, was in Korea recently to encourage relevant bodies here to join her organization’s medical service program in developing countries. 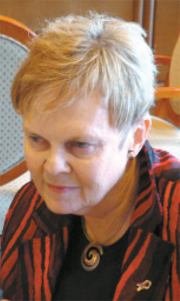 IPPF is a nongovernmental organization that provides support in the areas of sexual and reproductive health. There are currently 152 countries in the IPPF network. When asked for her thoughts on the low birthrate in Korea, she acknowledged that middle-class women are eager to establish a degree of financial stability before they commit to marriage. Therefore, they are increasingly placing their careers ahead of starting families. Additionally, parents can filter more resources into education if they only have one child versus several, she said.

In order to reverse Korea’s critically low birthrate, Greer - who spoke before the government unveiled new measures yesterday to combat the problem - pointed to France. The French government provides plenty of nursery and day care centers. Both mothers and fathers are also eligible to make use of leave at the same time, and married couples are encouraged to work for the same employers.

According to Greer, other countries have child care services readily available at universities and workplaces, too.

“Such services allow women to marry at an early age and have several children,” she said.

In Korea, there’s also a growing number of married couples experiencing fertility problems. According to Greer, this is largely because women are increasingly delaying marriage and, consequently, birth.

“One cannot put a limit on the number of test tube baby treatments,” Greer said. “The government must provide limitless support in such cases. Israel is one country that takes such a stance, and 5 percent of the country’s entire birthrate is the result of fertility treatment.”
By Shin Sung-sik, Kang Ki-heon [jason@joongang.co.kr]