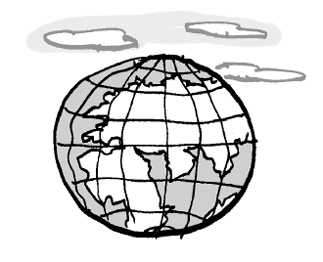 Zambia looked set for success on the eve of its independence from Britain in 1964.

Developed countries had their eye on the nation’s copper reserves - the largest in the world and thought to be enough to last 50 years - and were prepared to provide enormous amounts of aid.

Instead of prosperity, the per capita income fell from $540 per year in 1964 to $300 per year in 2000, while copper production dropped by a third during the same time period.

The problem? The government was incompetent and riddled with corruption, bent on pursuing an inefficient nationalized economic system while misusing foreign aid instead of investing in economic development.

Zambia’s story exemplifies the so-called the curse of foreign aid, the inability to push forward economic development despite large sums of money coming in from other countries.

Countries like Zambia become, in effect, a bottomless jar into which funds are poured over a long period of time.

Eventually, when donors realize that their efforts are going nowhere, the amount of aid begins to dry up.

We then begin to see another phenomenon: aid fatigue. It becomes harder to persuade countries to give money to other nations if it is increasingly obvious that the recipient country is utterly corrupt and inefficient economically, completely unable to adopt an administrative system that would allow the nation to develop.

Later, at the beginning of the 2000s, the amount of aid to Zambia started to increase after the 9/11 attacks on the United States and frequent outbreaks of other regional disputes around the world.

People began to assess the situation in terms of overall global security.

The idea was that we could create a more peaceful and prosperous world if people living in poverty were given the chance to develop through opportunities in business and education.

The United Nations, which says wiping out poverty is one of its development targets for the new millennium, recommended in 2002 that advanced countries provide more than 0.7 percent of their GNI to developing countries as Official Development Assistance funds.

At that time, only five countries - Denmark, Luxembourg, the Netherlands, Norway and Sweden - were achieving the target.

In the international community, these countries are known as the G-0.7 after the G-7, formed by the economic powerhouses of the West. But, G-0.7 is a more honorable moniker.

The Republic of Korea, a poor country that managed to survive because of aid from the United States, has grown up to be a member of the Development Assistance Committee of the OECD. DAC deals with issues related to providing assistance to developing countries.

It certainly is something that we should take pride in and celebrate for ourselves, but we must never be complacent.

Last year, the percentage of ODA Korea provided to developing countries in GNI was so small that it was far from being a match with those of G-0.7 countries. On the contrary, another zero was needed after the decimal.

To be honest, the cheering and shouts of joy over winning the right to host the G-20 meeting in Seoul next year makes me embarrassed.