Pohang takes on Seongnam in semis

Pohang takes on Seongnam in semis 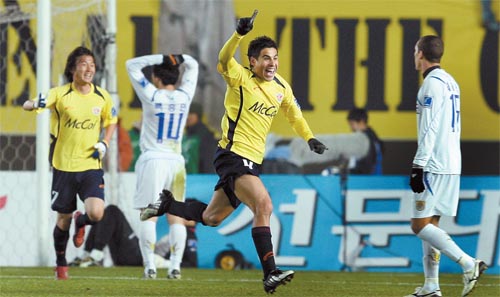 Mauricio Molina of Seongnam Ilhwa Chunma celebrates after scoring the game’s lone goal in the second round of the K-League Championship on Wednesday night against Chunnam Dragons at Seongnam Sports Complex. [YONHAP]

Pohang Steelers and Seongnam Ilhwa Chunma will renew their rivalry in the semifinals of K-League Championship at the Steelyard in Pohang, North Gyeongsang on Sunday at 3 p.m.

Pohang Steelers have been very impressive this season. The Sergio Farias-managed club finished second in K-League regular season with a record of 14 wins, 11 draws and three losses. And they won the Peace Cup Korea 2009 and AFC Champions League title. Pohang was also honored earlier this week at the AFC Annual Awards as the best professional club in Asia this year.

Now the Steelers are eyeing a league title to cap off their impressive season, one in which they were unbeatable at home. Pohang posted 15 wins and nine draws in 24 home games this season and in the process built a strong reputation for taking full advantage of their home field support. In playing an up-tempo attack-minded brand of football, Pohang scored a total of 109 goals in 49 games, including cup and Champions League play.

“The right team has advanced. It will be an entertaining match. I am pleased with our training camp in Gapyeong, Gyeonggi. Our players had to endure a very tight schedule this season and they were able to recuperate in a quiet environment,” Farias told the JoongAng Ilbo.

“When it comes to playing at home our players and myself included are very confident. We do not have a great record against Seongnam this season but we did not play poorly against them either. More importantly, we do not lose at home,” he said.

Seongnam is the most decorated club in the history of K-League with seven league titles and is looking to add another this season. A win against Pohang in a single elimination game will ensure the fourth ranked team a spot in the finals against Jeonbuk Motors. If there is one team that can defeat Pohang at home, it’s Seongnam. Led by rookie manager Shin Tae-yong, Seongnam boasts a record of two wins and one draw against the Steelers this season.

“Pohang is in all aspects, the best club this season. However, we were strong against Pohang with two wins and one draw,” Shin said. “Since we had a stretch of bad games against Pohang in the past years, the importance of beating the Steelers was emphasized since day one of my managerial post. I know Pohang’s weaknesses but I cannot go into them. Tune in to find out.”

Pohang dominates Seongnam in their all-time matchup but the bad stretch Shin refers to dates from Sept. 23, 2006 to Nov. 5, 2008 in which Pohang posted seven wins and two draws in nine matches against Seongnam. During that span, a “sprinkler incident” at the Steelyard during the quarterfinals of the FA Cup between the two clubs added fuel to the heated rivalry.

Seongnam had been enjoying a one-goal lead at the end of the first half when soon after the start of the second half, the sprinkler system in Seongnam’s defensive zone went off, soaking the area for about three minutes.

Pohang officials explained it was a system malfunction but Seongnam asked for the sprinkler system to be turned on in Pohang’s defensive zone for approximately the same amount of time. Pohang drew the game late in the second half before going onto win 8-7 in the penalty shoot-out.

Seongnam defeated Chunnam Dragons in the second round match on Wednesday, 1-0. In the process, they secured the fourth and final spot in next year’s AFC Champions League tourney, making a return to the Champions League for the first time in three seasons.

Seongnam Ilhwa was missing two of its central defenders and its manager Shin had to watch the game from the stands, communicating with the coaching staff through a walkie-talkie.

Sasa Ognenovski and Cho Byung-kuk were both ejected from the first round matchup against Incheon United and Shin was also tossed from the match after arguing the red card against Ognenovski. Despite the setback, Mauricio Molina headed in the lone goal of the match in the 23rd minute and that’s all Seongnam needed to hold off the feisty Chunnam club.