The K-League Championship finals between Seongnam Ilhwa Chunma and Jeonbuk Motors are finally upon us. The first leg of the home and away series will kick off tonight at 7 p.m. in Seongnam, Gyeonggi, and the second leg will take place on Sunday in Jeonju, North Jeolla.

Jeonbuk finished the season atop the league standings, but the fourth-ranked Seongnam defeated the AFC Champions League winners and AFC club of the year honoree Pohang Steelers in the semifinals. Here are two different takes on why Jeonbuk or Seongnam may win the league title.

They say a strong defense always wins. But this year will be an exception. 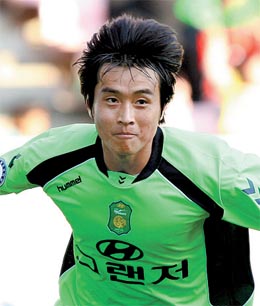 Jeonbuk Motors were the K-League regular season champions, while Seongnam Chunma have seen a sudden rise and are riding a three-game winning streak. But the clock will strike midnight soon for this Cinderella team. Here’s why.

Yes, we know, we know. Jeonbuk have not played since Nov. 1. That’s slightly more than a month of inaction, and Seongnam supporters and Jeonbuk detractors will point to the “rust factor.”

But Seongnam has played three games in a span of eight days - three intense, high-stress, win-or-go-home matches. During the season, teams usually play a game per week, two at the maximum when you factor in the FA Cup or other auxiliary contests.

And when the championship kicks off tomorrow, it will make four games in 11 days. Seongnam players are just playing on the good vibes from having won their last three, and they won’t be able to match the well-rested Jeonbuk players physically.

Chips on their shoulders

In the playoffs, you can’t beat a team with players that have something to prove. And the Motors have two guys with scores to settle.

Striker Lee Dong-gook and midfielder Kim Sang-sik were traded in a package deal by Seongnam late last year, soon after Shin Tae-yong was named the new head coach. Lee had come back from a largely unsuccessful stint in the Premier League and did little after his return. Seongnam had been the only team Kim had known in his 10-year career, but longevity and loyalty weren’t among the qualities Shin was seeking.

But under head coach Choi Kang-hee, Lee regained his scoring touch and won the K-League scoring title with 20 goals. Team captain Kim, who once played on the national team, provided stability as a center back and a defensive midfielder.

Lee and Kim are both soft-spoken men. They would never publicly say they want to beat Seongnam and shove the championship trophy at Shin’s face. But their actions on the pitch will say everything that needs to be said.

Jeonbuk was the league’s highest-scoring team this season with 59 goals. Lee Dong-gook had plenty of help from Luiz Henrique, Eninho and Choi Tae-uk. The three finished 1-2-3 in the league’s assist totals.

Over the past two seasons, Choi has scored five goals against Seongnam. In an early season match, he picked up his first career hat trick against the helpless Seongnam defense. And he’s been on a roll. He missed some time after injuring his ankle in May, but in his final five games, Choi notched four goals.

Seongnam’s defense will be exhausted after barely fending off the Pohang Steelers Saturday. And the Steelers don’t quite have the firepower that Jeonbuk will put on display in the finals. They say a solid defense always beats a good offense in sports. But there are always exceptions. This year’s K-League finals will be one.

Seongnam Ilhwa Chunma
A manager on a hot streak and a tight game will help against the rusty Jeonbuk.

Seongnam are currently looking to win their eighth league title after defeating the Steelers on Sunday, 1-0. Led by rookie manager Shin Tae-yong, Seongnam have overcome several obstacles to advance to the finals. Seongnam will again have to plug several holes in their lineup as Dzenan Radoncic and Lee Ho will not be available in the first leg due to accumulated yellows, and Jang Hak-young and Kim Jung-woo will miss both matches. Losing four regulars from a lineup prior to the finals is huge, but there are three big reasons to root for the underdogs for the K-League title. 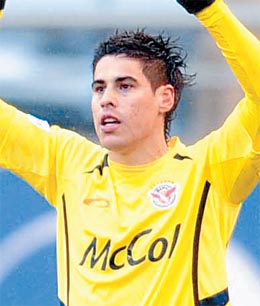 Managing in his first postseason, Shin Tae-yong, 39, has been nothing short of impressive. The first big test for Shin came in the first round against the feisty Incheon United squad. Defenders Sasa Ognenovski and Cho Byung-kuk were ejected from the game and Shin had to give orders on a walkie-talkie from the stands after being tossed for arguing the call on Ognenovski. The rookie manager went on to move goalkeeper Jung Sung-ryong as a positional player and substituted goalkeeper Kim Yong-dae into the match. The gamble paid off as Kim went on to save two penalty shots and score one of his own to propel Seongnam into the second round.

More importantly, Shin is a proven winner who has won at every level throughout his career. Shin was a part of Seongnam’s first league title-winning season of 1995 and went on to win three consecutive titles. He then became the captain of the club in 2001 and led the club to another three victories. Shin is no stranger to winning big games, and that should help him in the finals.

Seongnam won the first two rounds on penalty shootouts and took a nail-biter against Pohang in the semis. As they are coming off just a two-day rest, players might not have much left in the tank. However, Seongnam’s run in the postseason will prove advantageous against Jeonbuk, which have not played a game since the regular season finale against Gyeongnam FC Nov. 1.

Take, for instance, the Pohang Steelers in 2007. The fifth-seed Steelers won three close matches before defeating Seongnam 4-1 in aggregate score to win the league title.

Since the end of the regular season, Jeonbuk manager Choi Kang-hee has avoided friendly matches in fear of injuries. That means Jeonbuk has not played in any games in a little over a month. Choi’s decision could prove to be costly. Look for Shin and his men to take full advantage of the rusty Jeonbuk players in the first leg.

The point of strength for Seongnam has been its team defense and a counterattack led by Radoncic and Mauricio Molina. Seongnam have proven more than capable of detaining high-scoring teams and allowed only two goals in the playoffs so far. They will miss Jang on defense and Lee and Kim Jung-woo at midfield. But they have a reliable defender in Ognenovski, who returns to the lineup for the series. With Molina on a hot streak, Seongnam can use two forwards and direct their energy to defending against Jeonbuk’s Lee Dong-gook and Choi Tae-uk.