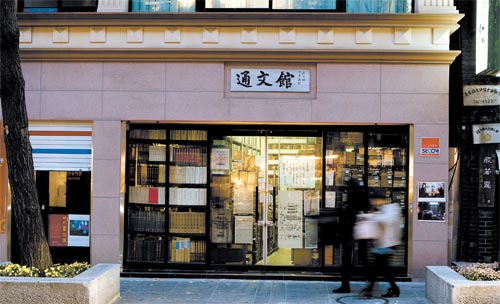 Tongmunkwan, a store in Insadong that sells old and rare books, is one of only two left in the area. By Shin Dong-yeun

For many avid readers, there is something lovable about the faint yet familiar smell of old books.

That’s long been part of the allure of stores in Korea that sell older, rare and out-of-print books and texts, as they carry the unique scent of millions of pages of aged paper.

But these types of stores are turning into antiques themselves, threatening to end a treasured chapter of the printed word’s history in this country.

Numerous neighborhoods that once had a high concentration of stores selling older and rare books written here - which typically date from as far back as the 1600s until the late 20th century - have transformed into state-of-the-art shopping areas geared toward tourists. Today, there are only about 50 of these stores left in the country, and the number is dwindling yearly, according to Yo Soon-ku, the director of the Hwabong Book Museum. In Insa-dong alone, the number has dropped from 30 several decades ago to just two today.

Numerous factors are at work, including less interest in reading and an uneven pricing structure. The official end of mandatory education of Chinese characters in the early 1970s as played a role, as all books written here before the 1920s were written in those characters .

“Even university professors find it hard to read old books unless they majored in Chinese literature,” Yo said.

After Korea’s liberation from Japanese colonial rule in 1945, the publishing industry faced a crisis as the nation plunged into chaos in the ensuing years. It wasn’t until the end of the Korean War in 1953, when the central government returned to Seoul from its temporary base in Busan, that old books really started to gain a foothold.

But the past two decades haven’t been kind to this industry.

Take for example Tongmunkwan, a 75-year-old bookstore in Insa-dong. A sign in front of the shop reads, “It’s better to pile books than gold,” but these days, it seems, few people agree.

The shop used to attract swarms of customers, but business slowly began to erode starting in the late 1970s. 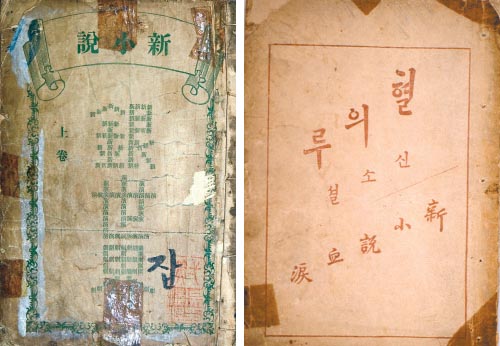 Original copies of rare books, such as “Eun-se-gye” (left top) and “Hyeol-ui-ru” (left middle), line the shelves of shops that sell antique, rare and older books in Insa-dong.

“Getting no customers in a day was once unthinkable,” said Lee Jong-woon, the owner of Tongmunkwan.

Today, however, it happens frequently.

“Our customer base skews older, so when the weather gets cold nowadays, we get no one in here at all,” Lee said.

In contrast to Korea, some countries continue to have flourishing markets for older books.

In Tokyo, Japan, the annual Kanda Used Book Festival was recently held for the 47th time in the city’s “book town” of Kanda-Jimbocho, underscoring the country’s continuing love of the written word. This book-focused area of Tokyo is bustling with crowds all year long, and you’re just as likely to find teenagers wearing iPods as silver-haired men browsing the stores.

“While strolling through Jimbocho’s old bookstores, you can find all types of content, ranging from literature to entertainment,” said Kim Moo-kon, a mass communications professor at Dongguk University.

According to Kim, the stores in this neighborhood have 10 million books in total.

“In Jimbocho, there are bookstores run by owners who inherited the businesses from their ancestors and also ones that are run by younger people that have a specialty, like movie pamphlets.”

Europe also has an abundance of old bookstores.

Hay-on-Wye, a small town in England, is essentially a giant library. With a population of a mere 1,300 people, the town is carpeted with more than 40 bookstores. The centerpiece of the town is Hay Castle, which has roughly 100,000 books arranged in alphabetical order.

Hay-on-Wye has become a benchmark when it comes to books for other countries including Belgium, Norway, the Netherlands, Italy and Germany.

Aside from the end of mandatory Chinese education in Korea, experts in the publishing industry say there are three primary reasons these types of bookstores are collapsing here.

One of the biggest is tied to the current cultural climate, as reading books isn’t high on people’s minds. According to Statistics Korea, 58.9 percent of Koreans aged 15 and over read books in the past year, down 3.3 percentage points from 62.2 percent in 2004.

While many countries are experiencing similar declines, Korea’s overall level is lower than some other advanced nations. In the United States, for instance, about 75 percent of the population read at least one book in a year’s time, according to a 2007 Associated Press/Ipsos poll. 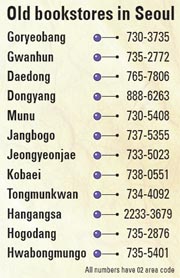 In Japan, the government even takes an active role. It recently announced, for example, that 2010 will be the “Year of Reading,” showing a high-level commitment to books.

Another problem lies with the current pricing structure, which some observers say is simply a mess. One store, for example, might sell an old book for 100,000 won ($82.26) while the shop next door sells the same one for 500,000 won. That, experts say, erodes consumer trust.

Additionally, fewer people have expert knowledge of and experience with old books in Korea.

To truly become knowledgeable in older books, Yo said, one needs to study as much as a scholar to develop an expertise in the content, publication dates, editions and printing methods of the books and texts. Younger Koreans now, however, don’t want to spend their entire lives studying for a business that provides limited income and has a bleak future, Yo said.

To reverse the trend, observers say Korea should get involved at a government level, like Japan.

The Internet also could help revive the industry. The owner of the other old bookstore in Insa-dong, for instance, is considering turning the store into an auction house with the help of the Internet, believing that it is the most effective way of price-setting and can help expand the market.

But some in the book industry, including Yo, see this as a negative development. The charm of buying a book, especially an old one, is being able to touch and smell it before purchase, they say.

“It’s true that an increasing number of people are purchasing books online,” said the owner of Tamura, a 100-year-old bookstore in Jimbocho, Japan. “But the feeling of picking out a book by browsing through a stack in a store is incomparable.”