Korean boxing great Chang gets a place in hall of fame

Korean boxing great Chang gets a place in hall of fame 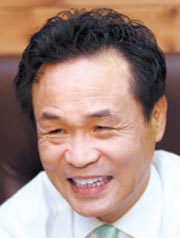 The International Boxing Hall of Fame and Museum announced its class of 2010 on Tuesday and the 46-year-old was included on a list of former greats who are to be inducted next June.

Chang will officially be inducted during the official enshrinement ceremony on the hall of fame museum grounds in Canastota, New York on June 13, 2010. What makes the announcement significant is that Chang is the first among a long list of former Korean boxers to be inducted into the hall of fame

“The first thoughts that crossed my mind following the announcement were the tough training camps, rather than thoughts of happiness,” Chang said to Yonhap. “I will think of it as a prize for the tough day-to-day training I had to endure as a fighter.”

Born on Feb. 4, 1963 in Busan, Chang entered the professional ranks in 1980 at the height of the sport’s popularity in Korea. Known for his hand and foot speed, Chang was also respected for his boxing skills. Chang got his first shot at a world title on Sept. 18, 1982 against Hilario Zapata of Panama in a 15-round match. Although Chang lost the match in a split decision, he would avenge the loss in a rematch held in Daejeon on March 26, 1983. After winning the WBC world title over Zapata, Chang would stake his claim as one of the best in the history of his weight class by defending his title a total of 15 times until his first retirement in 1988. He came out of retirement in 1989 but lost three title matches before retiring for good in 1991.

Chang’s 15 consecutive world title defenses at the light flyweight division were a record at the time until former WBA light flyweight champion and current Korean Boxing Commission affairs secretary general Yuh Myung-woo set a new record with 17 consecutive title defenses between 1985 and 1991. Chang also has the distinction of being the first Korean boxer to be ranked among The Ring magazine’s top 10 pound-for-pound list. The ranking system sorts the best boxers regardless of weight divisions. Chang was also chosen as one of WBC’s top 25 fighters of the 20th century in 2000 and was rated second behind Michael Carbajal in The Ring’s all-time best light flyweight boxers.

Chang was nominated in 2007 but fell short in the final votes. The inductees are voted in by members of the Boxing Writers Association and a panel of international boxing historians.