Janka in great shape ahead of upcoming competition

Janka in great shape ahead of upcoming competition 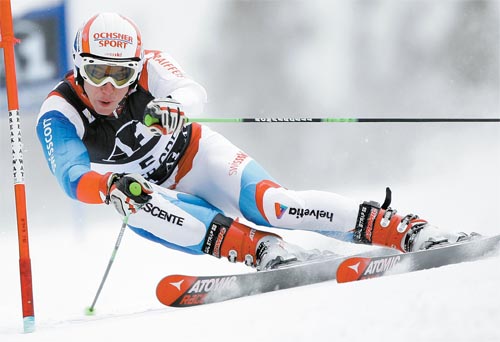 
VAL D’ISERE, France - Swiss tyro Carlo Janka returns here for a three-day World Cup event starting Friday in the best form of his life, relishing the chance to perform on an unforgiving slope.

The 23-year-old Janka became the first man since 2007 to win three consecutive alpine men’s World Cup ski races when he won the giant slalom on the Birds of Prey course at Beaver Creek in Colorado last weekend, adding to his earlier victories in downhill and super combined.

Tellingly, it was the last North American elite race before next February’s Winter Olympics at Vancouver and left Janka installed as the World Cup overall leader.

Janka has fantastic form on the gruelling Face de Bellevarde piste on which the men will compete for the super-combined, super-G and giant slalom starting on Friday.

The Swiss won bronze in the downhill before overcoming a bad mistake early on his second run to record a comprehensive victory in the men’s giant slalom at the World Ski Championships on the same slope here in February.

That win mirrored his victory in the 2008 World Cup giant slalom in Val d’Isere.

“There aren’t a thousand and one options - you just have to attack,” Janka said of the notoriously difficult Bellevarde course after his win in February.

Standing at an altitude of 1,850 metres (6,070 feet), Val d’Isere hosted the men’s alpine skiing events for the Albertville Winter Olympics in 1992, and since 1955 has hosted the “Criterium de la Premiere Neige,” traditionally the opening stage of the World Cup circuit.

The “Face,” which in 1992 hosted all the Winter Olympic men’s events with the exception of the slalom, is renowned as an extremely difficult and technically demanding piste, and certainly one of the toughest on the circuit. The slope enjoys a vertical drop of 1,000 meters, almost entirely visible from the center of the village.

After his success in Beaver Creek, Janka vowed to carry on his battle after the circuit left North America before the Winter Olympics. “It is a long season,” he said.

“It’s very important that I continue to ski well in Europe.”

The Swiss team’s speed coach Sepp Brunner tied Janka’s rise to prominence partly to his ability to soak up information at a rapid rate. “He understands very quickly what we show him on the video,” Brunner said. “He analyzes things very quickly and is able to put them into practice on the slope.”

The Swiss standout has 460 points in the overall World Cup standings, 105 more than his second-place compatriot, Didier Cuche, with Austrian Benjamin Raich third at 281.

Veteran Cuche, the reigning world super-G champion, is also in fine form, winning the first World Cup men’s giant slalom race of the season in the Austrian resort of Soelden.

Other rivals for at least one of the titles this weekend include Raich and American Ted Ligety. Ligety finished fourth in the Beaver Creek giant slalom behind Janka, Raich and Norway’s Aksel Svindal, but has also fared well on the Face de Bellevarde, winning giant slalom bronze at the worlds.