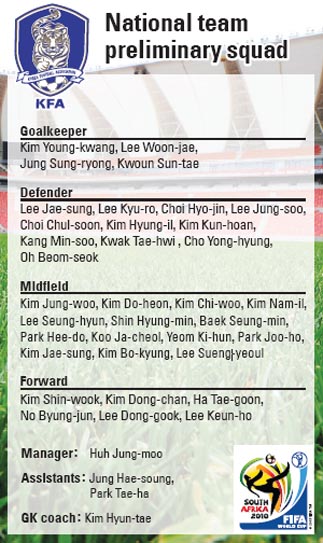 The national team’s road to the round of 16 at the 2010 World Cup starts over the Christmas holidays. National team manager Huh Jung-moo announced a preliminary roster of 35 players at the Korea Football Association building in central Seoul yesterday.

Jeonbuk Motors forward Lee Dong-gook headlines a list of domestic and J-League players. The current preliminary list will be trimmed to a 25-man roster after a round of physical tests and practice matches on Dec. 26 and 27 at the National Training Center in Paju, Gyeonggi. The players that survive that round of cuts will travel to Rustenburg, South Africa and Malaga, Spain for overseas training - the next step in making the team for the 2010 World Cup in South Africa next June.

“Most players take a break from training at the end of each season. Their physical condition deteriorates as a result and it takes quite a bit of time to get back to top playing shape. The reason we are choosing a preliminary squad is to ask players to make the sacrifice and get in top shape,” Huh said at the press conference.

“It is our intention to cut players who are not in physical shape to play, regardless of their experience on the national team. We will hold physical strength tests on Dec. 26 and 27. We will check to see who is ready for battle.”

With the K-League and J-League seasons wrapped up, the national team coaching staff have selected players from the two leagues, leaving out other overseas players. As such, this will be the last opportunity for the players inside the Asian bubble to leave a lasting impression on the coaching staff.

Huh and his assistants are searching for young and promising players who are eager to hustle and provide energetic play on the big stage. As such, Huh and his assistants have filled the preliminary roster with 15 players who have never appeared on the national team. Some of the notable names with limited international experience are Koo Ja-cheol of Jeju United, Lee Seung-yeoul of FC Seoul and Kim Bo-kyung of Hongik University. The three players were part of the U-20 squad that reached the quarterfinals at the U-20 World Cup in Egypt earlier this year.

No Byung-jun of Pohang Steelers will get a shot at earning a spot among a group of forwards that includes Lee Dong-gook, K-League’s top goal scorer with 20, and Lee Keun-ho. Kim Bo-kyung is also in the group and is the lone university student to have been selected for the preliminary roster.

“We have been given a lot of time to evaluate players this time. I don’t think we will get this type of opportunity again. Of course, once the K-League and J-League seasons start again next year, other players can get a shot, but this is a great opportunity for national team hopefuls,” explained Huh.

South Korea has been grouped with Argentina, Nigeria and Greece for the 2010 World Cup. The biggest challenge for Korea will be the second match against Argentina at Soccer City Stadium in Johannesburg. The biggest venue of the tournament is located 1,694 meters, or slightly over a mile, above sea level, and it will be crucial for the national team to get adjusted to playing at high altitude. As such, Huh said he has made a formal request to the KFA to hold three friendly matches during their training camp in Rustenburg, which is1,153 meters above sea level, from Jan. 5 to Jan. 15.

Huh and his men then head to Malaga, Spain for an eight-day training camp and will play an additional two to three friendly matches. Finland and other national teams are on the list of possible opponents. The national team will return from its overseas training on Jan. 24 and will regroup for the East Asian Football Championship to be held in Japan from Feb. 6 to 14.