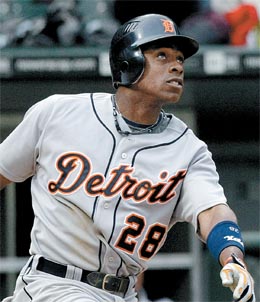 Detroit sent starter Edwin Jackson to Arizona, who shipped pitchers Max Scherzer and Daniel Schlereth to the Tigers. Granderson, 28, batted .249 with 23 doubles, eight triples, 30 homers, 71 runs batted in and 20 stolen bases last season for Detroit and was selected for the All-Star team.

The addition of Granderson could affect the Yankees’ stance toward bringing back free agents Johnny Damon and Hideki Matsui, the World Series Most Valuable Player.

The Diamondbacks expect Jackson and Kennedy to fortify their starting rotation. The 26-year-old Jackson was 13-9 with a 3.62 ERA and 161 strikeouts in 214 innings last season. He also made his first All-Star appearance.

The deal was made possible thanks to Detroit’s desire to shed payroll, which they will do by shipping away Granderson, who will make more than $23 million over the next three seasons, and arbitration-eligible Jackson, Major League Baseball Web site MLB.com reported.

In return, Detroit got cheaper young players in Scherzer, who struck out 174 batters in 170 1/3 innings in his first season as a full-time major league starter, and 22-year-old outfielder Jackson.

Scherzer, 25, should slot into the Tigers’ rotation behind ace Justin Verlander and second-year righty Rick Porcello. With Granderson gone, Jackson has a chance to win Detroit’s center-field job.

Pettitte went 4-0 with a 3.52 ERA in five postseason starts in 2009, winning his fifth championship with the Yankees. The two-times All-Star earned a base salary of $5.5 million in 2009, and collected another $5 million in additional performance-based incentives, MLB.com reported.

Pettitte has a 229-135 record with a 3.91 ERA in 12 years in New York and three with the Houston Astros. His 192 wins with the Yankees ranks third all-time behind Whitey Ford and Red Ruffing.