Night at the movies, in 3 dimensions

Night at the movies, in 3 dimensions 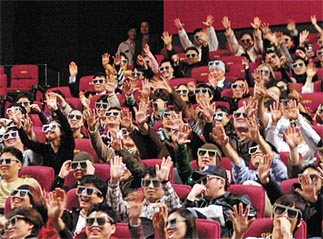 Many adults can vividly recall the first time they donned multicolored cardboard glasses and elbowed their way into a theater or plopped down in front of the television to watch a three-dimensional show. Perhaps they ducked when a batter hit a baseball toward them or flinched when a hand shot out of the screen. Or maybe they simply sported a puzzled look because nothing in the film or show seemed very 3-D at all.

Today’s three-dimensional fare is a vast improvement from those days, offering a realistic experience that will have you believing you’re actually a part of the scene - although the glasses look just as goofy as ever.

Most recently, “A Christmas Carol,” an adaptation of the famous novel by Charles Dickens, opened here in November, showing just how far a 3-D film can go. One particularly memorable part of the animated movie, directed by Robert Zemeckis, involves a scene where snow is falling on the streets. With the 3-D effects, the sparkling snowflakes look realistic enough to catch on your tongue.

But an upcoming film could be the turning point for 3-D, one that industry observers say could help lift the technology fully into the mainstream. “Avatar,” a sci-fi film by world-renowned director James Cameron, has been generating a huge amount of buzz in the movie world. When it debuts here next week, it will be shown on over 100 screens with 3-D capability - the highest number ever in this country for such a movie, according to Fox Korea, which is distributing the release.

Considering that the latest installment of the hit “Ice Age” series recently opened with 34 3-D screens in Korea, the release of Avatar is a watershed event for the technology here. The film will be shown on nearly all of the 120 3-D screens in Korea.

“We believe that the movie Avatar will be a breakthrough for 3-D films,” said Scott Sung-woo Kim, general manager at CJ CGV, the biggest movie theater chain in the country. 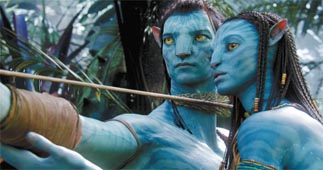 A scene from “Avatar,” a 3-D sci-fi movie directed by James Cameron. Provided by Fox Korea

Avatar is part of a huge 3-D wave sweeping over the movie world. Next year, numerous 3-D films - including “Shrek Forever” and “Toy Story 3” - are scheduled to be released. Walt Disney Pictures, which was behind “A Christmas Carol,” has said it will produce 22 additional 3-D films by the end of 2011. DreamWorks, the studio behind some of the biggest animated hits over the past decade including the “Shrek” series, has said all animated movies it makes going forward will be in the 3-D format. Peter Jackson, the director of the blockbuster “King Kong,” is producing “The Adventures of Tintin: The Secret of the Unicorn,” scheduled for release in 2011.

And the list goes on. Locally, as many as 25 3-D films are scheduled to debut in theaters next year compared to 10 this year, according to CJ CGV.

There is a growing interest in 3-D films among movie theater operators as well. CJ CGV said earlier this year that it would double the number of its 3-D screens to 80 by year’s end. Lotte Cinema, the second-biggest multiplex operator in the country, plans to increase its 3-D screens to 30 from 18. Megabox is looking to add 25 more 3-D screens by the end of next year. The investments underscore the growing optimism around 3-D films.

“More and more 3-D content is becoming available,” Kim of CJ CGV said, explaining why local movie theaters are more committed to the technology than ever before. “In the past, local movie theaters were reluctant to install 3-D projectors. Due to a lack of good 3-D content, they could only play 3-D films three to four months a year. Now, they can run 3-D screens year-round.”

“We are watching the change carefully and increasing screens with 3-D capabilities accordingly,” said the worker, who declined to be named. 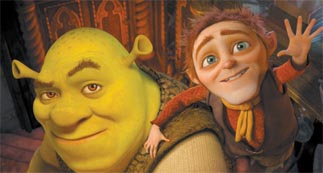 With increasing investments by theaters and a larger amount of films in general, 3-D movies are ready to take off in Korea and elsewhere, possibly becoming the standard for animated films.

Most of these films are released with both a 3-D version and a traditional two-dimensional version, with each one playing on different screens.

The content is evolving as well, which could draw in even more viewers. So far, most of the recently released 3-D films have been animated features. As the technology develops, though, directors are incorporating more real-life scenes. Avatar, for instance, actually mixes animated and live-action scenes, much like this year’s “My Bloody Valentine” and “Final Destination 4.” More of these hybrid 3-D movies are slated for next year.

“Producers are attracted to these films because there is no limit to the application of 3-D technologies,” said Mark Kim, product manager at Fox Korea.

Three-dimensional films can be a boon to theaters that show them, as viewers are often willing to pay extra to see them. Although theaters have to invest in the technology, they can often charge an average of 15 percent to 20 percent more than the 2-D versions. And sometimes they can get even more than that. At Daehan Cinema, a 3-D film costs 12,000 won ($10.40) - 50 percent more than the 2-D releases, which cost 8,000 won. In addition, 3-D films are hard to copy, cutting down on piracy.

The local film industry has seen all of these benefits and is taking more of an interest in making 3-D films. The 14th Pusan International Film Festival in October had a 3-D convention, while the state-run Korea Creative Content Agency held a 3-D film production workshop this week. Additionally, the Korean Film Council produced a 3-D short titled “Mot” as a pilot project this year to develop more of these types of movies. “Korean companies have advanced 3-D technologies, such as 3-D television sets, but the country is behind Hollywood in making 3-D films,” said Choi Nam-shik, a technology officer at the council. “It will take some time to catch up.”