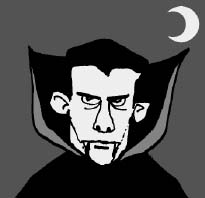 The origin of bloodsuckers can be traced back to Lamia, a child-eating demon in ancient Greek mythology, or strigoi, the troubled souls of the dead rising from graves in Romanian mythology. But the word vampire appeared, at the earliest, in 17th century Europe and in 18th century English literature.

Laurence A. Rickels, a professor of German and Comparative Literature at the University of California at Santa Barbara, explains in “The Vampire Lectures,” the Korean translation of which was published recently, that the reason the fear of vampires spread rapidly in Europe at that time was the vague fear Western Europeans had of the barbarity or “something different from them” of people from Eastern Europe.

According to Rickels, people belonging to certain groups were classified as those who were more likely to rise from the dead to suck blood from the living. They were alcoholics, suicides, sleepwalkers, children who died before baptism, prostitutes, homosexuals, children born with a cleft lip, and so on.

One common point is they are people likely to be alienated from society. In other words, they are outsiders whose deaths others would not mourn. If we ponder this, we can see that, in the vampire legend, there is a hidden utilitarian warning that a community can suffer if certain sections of society are neglected.

The Irish author Bram Stoker featured a vampire in his 1897 novel “Dracula.” The protagonist of the fiction, the monster became a metaphor that reminded people of the stupidity and transience of the desire for immortality.

But the handsome-looking young men featured in the “Twilight” movies are completely different from the vampires of the past. “New Moon,” the second installment of “The Twilight Saga” has already recorded $250 million in box-office receipts in the United States and has attracted one million moviegoers in Korea.

The vampires in the series do not agonize over immortality or guilt. They can satisfy their thirst for blood by using blood banks, not by killing humans. They have mysteriously attractive appearances and supernatural powers. And they whisper in the ears of women that “the fact that you breathe is a present to me.”

It seems only natural that women fall in love with them.

In the heat of “New Moon,” the naive vampire legend that preaches the need to look out for and take care of minorities has no room to interrupt.

When female movie fans look at Robert Pattinson, the actor who portrays the protagonist, it’s like they’re turned into teenagers swooning over their idol.

Even though we are in an era where people evade agonizing over big decisions, I wonder whether it is too much to expect them to think about the meaning of the dark side of the moon.