Historic building just out of reach

Historic building just out of reach 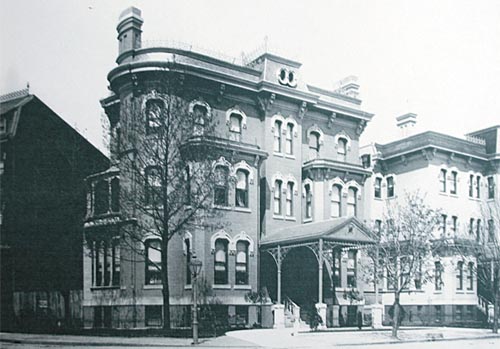 A photo of the Korean legation building, which is now owned by an American businessman, in Washington, D.C., taken in 1903. Korean government officials are trying to buy back the building but have not been able to come to a deal with the owner.

An important piece of history has captured the attention of the South Korean government, though the object in question is located half a world away from Seoul.

Local officials have made some aggressive attempts to buy back the former Korean legation building in Washington, D.C., which was used at the dawn of the Korean Empire (1897-1910) and then quickly sold under controversial circumstances. Today, it is the home of the American businessman who owns it. 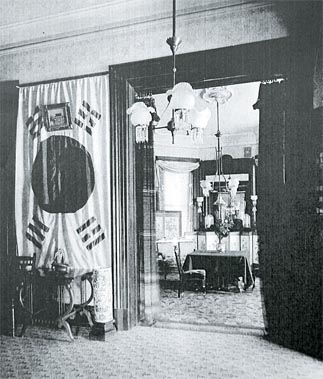 The building’s interior was decorated with a Korean flag and other items representing the country. Provided by Yoon Gi-won, director of the Association for Conservation of Korean History.

The story surrounding this roughly 120-year-old building includes numerous elements, including a controversial sale, possible forgery, an owner reluctant to sell and several failed attempts by other groups to reclaim the building for Korea. In any event, it carries a hefty dose of significance for the country, shedding light on its turbulent past.

Like those before it, however, the government’s efforts have been unsuccessful, and it seems as if there’s little chance that the building will return to Korea’s hands any time soon. 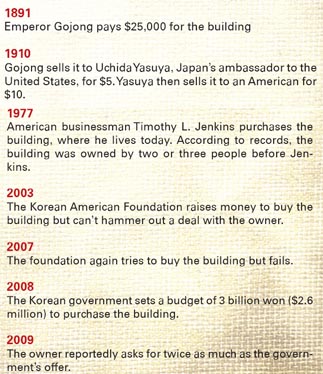 The history of the structure, as far as Korea is concerned, dates back to 1891, when Emperor Gojong (1852-1919) wanted to check the growing influence of the Qing Dynasty of China. He figured that by placing an embassy in the United States - a country that Gojong felt wouldn’t threaten the sovereignty of Korea - he could nurture ties with another big power.

During its heyday, the exterior of the building sported a large Korean flag proudly planted on the roof, while the interior was decorated with cushions displaying the taegeuk, the blue-and-red symbol that represents Korea, along with pictures of Gojong and his son.

But Korea didn’t control the building for long. The signing of the Japan-Korea Protectorate Treaty (also known as the Eulsa Treaty) in 1905 deprived the empire of its diplomacy rights, and the embassy was immediately shuttered. Then, in 1910 - four days after the signing of the Japan-Korea Annexation Treaty - Japan’s ambassador to the United States bought the building for $5, only to turn it around and sell it for twice that amount to an American.

The swift transaction has raised many question marks regarding the legality of the sale, and experts have re-examined the contracts, which are currently in U.S. archives in Washington.

Some feel that forgery was involved in the sale to Japan’s ambassador. The first contract says “His Majesty the present King of Chosun Ye” bought a building from Sevellon A. Brown on Dec. 1, 1891. But the second one says “His Majesty, Ye Hiung, Ex Emperor of Korea.” Under old Korean court custom, it was forbidden to spell out the emperor’s real name in documents. Some experts, therefore, feel that the building was forcefully sold the second time.

The signatures of Emperor Gojong and two high officials in the empire’s government at the time - Min Byeong-suk and Cho Min-hee - along with that of Goineya, the Japanese official affiliated with Korean affairs, cemented the second contract.

But Yoon Gi-won, the director of the Association for Conservation of Korean History, suggests that compared to the neat handwriting of Goineya, the other three signatures seem messy and awkward. “There is a high possibility that the signatures were forged,” he said.

To shed light on the matter, relatives of Gojong and Cho provided the JoongAng Sunday with some of Min and Cho’s personal documents. The handwriting in the documents is clearly different from the signatures of the two on the contract.

“The embassy that my grandfather worked so hard to acquire was taken away by force,” said Lee Hae-hyeong, a granddaughter of Gojong who currently resides in New York. “How could this happen?”

The intrigue continues today, as efforts by several groups - and now the government - to buy the building have failed.

After several other ownership changes, the building fell into the hands of Timothy L. Jenkins, who bought it in 1977. Jenkins is the chairman of a telecommunications company and previously served on the transition teams of former U.S. President Bill Clinton and Washington, D.C. Mayor Anthony Williams.

The building had largely escaped the Korean consciousness over time. But in 1983, Dankook University emeritus professor Kim Won-mo went to Washington and examined the older documents dealing with the sales. He then repeatedly filed petitions with the Blue House and the Korean embassy in the U.S. to reclaim the building, to no avail.

In 2003, the Korean American Foundation raised $1.5 million, which was more than enough to meet the market price of $1 million at the time, the group said. Jenkins could not be reached for comment for this article. But the foundation said he asked for nearly three times that amount. Domestic efforts to purchase the building by the Christian Council of Korea failed as well.

The Korean American Foundation again attempted to negotiate a deal in 2007. Jenkins asked for an apartment in D.C. as well as moving costs and other expenses in exchange for the building, local officials said.

The government picked up the cause later that year at the suggestion of Lee Tae-sik, the former administration’s ambassador to the United States. Based on the Korean American Foundation’s talks with Jenkins, officials announced they would set aside 3 billion won ($2.6 million) to buy the building - an amount that would fund needed restorations as well. 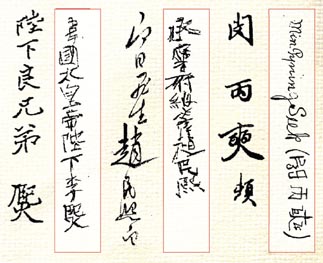 Contracts bearing the signatures, from left and in red, of Emperor Gojong, Cho Min-hee and Min Byeong-suk. Their usual signatures are shown in black. Provided by Lee Hae-kyeong and Cho Won-kyo

But the government said problems arose as it went through the necessary steps of securing the budget for the purchase. Not only has the won depreciated against the dollar, but the apartment Jenkins wanted has sold.

Jenkins, officials said, pointed to two other apartments he was interested in, but they had a much higher price tag. According to 2009 Washington, D.C. government information, the building and the land its sits on are valued at 2.2 billion won, though experts say the actual market value is about 10 percent higher. Still, Jenkins is reportedly asking for two to three times more than that price.

“Jenkins is reading up on any articles about the building in the Korean media,” said a person affiliated with this project in the Ministry of Culture, Sports and Tourism. “He knows its value very well.”

It’s now a long shot that Korea will get the building, at least in the near future.

“If the project isn’t successful by the end of this year, the budget allocated to it will be returned to the government,” said Gong Hyeong-sik, the director of the Korean Culture and Information Services.

Given that not even a provisional contract has been signed and there’s just two weeks left until 2010, the budget for the project cannot be moved to next year. For now, at least, the efforts to secure it seem dead in the water.

“If the owner changes his mind next year, it shouldn’t be a big difficulty to reapply for the [2011] budget,” Gong said. “But raising more than that seems out of the question.”

Still, others involved are hopeful that something can be worked out. “Next year will mark the centennial of Japanese colonization,” said Lee Tae-sik, “and I hope that by then we can reclaim the building.”