Can an elephant clean up its dung?

Can an elephant clean up its dung? 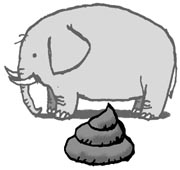 Elephants are the largest animals on earth. They eat well, too: around 400 kilograms (880 pounds) of dry grass, leaves, fruit, tree branches and bark every day. They also excrete a lot. The adult elephant excretes around 100 to 200 kilograms a day. This is a problem for zoos.

Zookeepers thought hard about the problem of the huge amount of waste. They noticed that elephant excrement was full of fiber the pachyderms could not digest, and developed “elephant waste paper.” The paper is thick with a texture similar to traditional Korean paper, and is produced in Thailand and Sri Lanka.

The paper is made like this: Elephant excrement is dried, and boiled and washed many times until only the high-quality fiber remains. The fiber is cut into small pieces like papier-mache and dye is added. Once sieved and dried in the sun, it is complete. Any odor or germs disappear in the process, according to Kim Hyung-ja in “Dung Science.”

A Japanese zoo sells elephant waste good luck charms with phrases like “pass the test” printed on paper made of elephant excrement. They say it brings luck as big as an elephant.

Elephant excrement has shaken the art world, too. Chris Ofili, a British painter with Nigerian heritage, focused on the fact that elephant excrement is used as fuel to make food and drugs to treat wounds in Africa. One of his paintings, “The Holy Virgin Mary,” portrayed an African Mary surrounded by dried elephant excrement and photographs of female genitalia. As soon as it was exhibited at the Brooklyn Museum of Art in 1999, New York City mayor and devout Catholic Rudy Giuliani flew into a rage. He said he would stop all financial funding to the museum if it did not stop the exhibit. However, the “elephant dung picture” was able to maintain its position in the museum after Hillary Clinton criticized Giuliani and the museum filed a lawsuit, writes Lim Geun-hye in “Empire of Creation: Sensations of British Contemporary Art.”

There was also a large piece of elephant excrement in Copenhagen, Denmark, where the COP15 United Nations Climate Change Conference was held. It was a large-scale picture produced by New York advertiser Lee Jae-suk. The picture depicted a sparrow trying to clean up elephant excrement with a broom, and the slogan, “Small countries can’t clean it up on their own. Big countries need to step forward.”

Strong countries are using all the fuel they can get and excreting a huge amount, just like elephants. Is there no bright idea to change the “elephant dung” into environment-friendly paper, fuel or drugs? President Lee Myung-bak was the keynote speaker at the conference and announced during his speech that Korea would establish a “global green development research center” in the first half of next year. Will a magic sparrow’s broom be developed?

*The writer is a political news reporter of the JoongAng Ilbo.