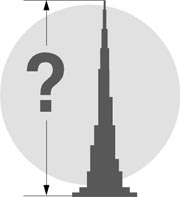 The world’s tallest building, Burj Dubai, which was officially dedicated on Monday, attracts the special attention of the Korean people because it is built in the United Arab Emirates, which recently awarded a contract of a nuclear power plant to a Korean consortium, and because of the involvement of Samsung Group’s construction arm, Samsung C&T.

One interesting aspect of the building is that Emaar Properties, the developer of Burj Dubai, is refraining from making public the exact height and the number of stories of the structure. Instead, it simply says that the building will be over 800 meters (2,625 feet) in height and over 160 stories tall.

It may be that even Emaar Properties does not know the exact height, because the building gradually gets shorter day by day. Even if they use very hard concrete in the construction, a building’s height inevitably shrinks under its own enormous weight. This is the so-called “vertical variation.” They say that Burj Dubai, which weighs over 540,000 tons, will get about 65 centimeters shorter after completion.

But the more obvious reason that Emaar Properties is not disclosing the height is that they are hoping to stoke people’s curiosity about the building. If that is the case, they have already succeeded to a certain degree. There are reports that people are resorting to measuring the building’s shadow and using mathematical equations to guess Burj Dubai’s height.

In the United States, buildings are labeled differently according to the height of their structure.

The enforcement ordinance of Korea’s building code defines “super-high” structures as “buildings that are over 50 stories or over 200 meters in height.” The points they use in measuring the height vary greatly. Generally, they measure between the ground level where the main entrance to the building is located and the top of the building except the antenna. But they sometimes include the length of the antenna in the measurement or exclude the floors where there are maintenance facilities.

Then, how can we compare Korean buildings’ heights with that of other countries? The average height of a story in Burj Dubai is 5 meters. That is almost twice as high as a Korean apartment building story, which is 2.7 meters. Naturally, a higher story costs more for construction.

However, the symbolism of a country or city’s greatness and the pride people find in supertall buildings are reasons enough to keep building higher.

In Korea, too, super-high buildings are rising one after another. This is a good chance for construction companies to develop and apply new construction technologies.

Korea has a chance to transform this homegrown technology into a steady source of income for generations to come by increasing the number of construction companies competing for supertall building contracts abroad.

I look forward to the day when the supertall buildings of the world are built by Korean construction companies.