A tradition fired in adversity

A tradition fired in adversity 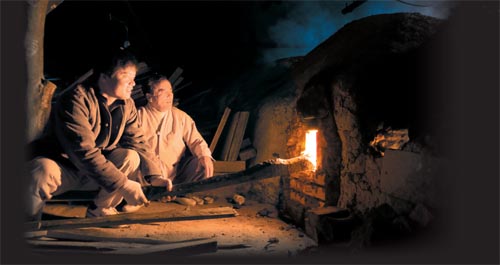 Kim Jeong-ok and his son Kyeong-sik work at their furnace in an area of Mungyeong, North Gyeongsang. [JoongAng Sunday]

When Kim Jeong-ok and his son Kim Kyeong-sik started the kiln to fire their last 200 pieces of pottery for the year on Dec. 2, they weren’t just making simple tableware. They were carrying on a tradition that stretches back 250 years.

The artisans, better known by their pseudonyms - the father is known as Baeksan, the son Woonam - are carrying on a family business that started during the Joseon Dynasty (1392-1910) simply to make a living, but has survived to the present as one of the last of its kind. The elder Kim has been designated Intangible Cultural Property No. 105, the only potter on the list.

Now the pair is already getting ready for the next firing, which will take place around Jan. 20, molding pieces with skills handed down over eight generations.

“Every time we start up the furnace we hope that everything will turn out fine, but sometimes that’s not the case,” says Woonam, now in his early 40s. “In those cases, we just hope for better results next time.” 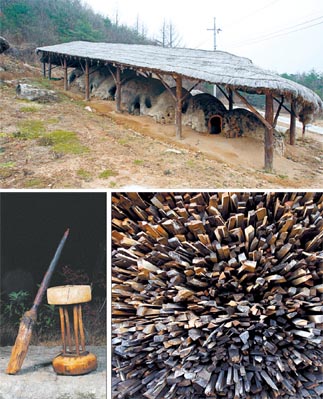 Clockwise from top, the Kim family once used these furnaces at Gwaneum, North Gyeongsang, still the oldest in Korea, built in 1843; this woodpile in Gwaneum reflects the family’s insistence on using old-fashioned wood-burning techniques, and this kickwheel used by the clan is more than 200 years old.

Every link in the generational chain is based on a son deciding to follow his father in a sometimes thankless profession - a challenge that both Woonam and Baeksan had to face.

“My mother didn’t like that I was continuing my father’s work, which required a lot of labor,” says Baeksan. “She probably wouldn’t be so mad at my father now that I have made a name for myself.”

Back then, Baeksan says, people thought of making pottery as nothing more than an unpleasant task. His brothers either became farmers or left to pursue their studies, so he had to step up and take on the family business.

Baeksan’s memories of his father’s work go back to the end of the Japanese colonial period in 1945.

“Our lawn would be filled with people the day after the furnace was lit. At that time, pottery was very rare, and our pieces made it all the way to Gyeonggi Province,” Baeksan recalls. “This is because during the Japanese colonial period people weren’t allowed to burn wood due to the forestation policies. It was a difficult time not only for us, since many of the furnaces were shut down, but for all people in Korea.”

“He was the richest man in the region, but that was it for the golden years,” Baeksan says.

The Korean War and ensuing modernization drives toppled the family from their perch. “Korean society didn’t have the mental or economic capacity to appreciate pottery after the war. We were pushed out by durable stainless steel and plastic tableware.”

After Baeksan’s father died in 1973, the last remaining customers stopped coming. At one point the furnace closed for three years.

Then, in 1982, Baeksan says, “I decided that we couldn’t just stay in the woods. We needed to go to somewhere more easily accessible.” So he left the family home in Gwaneum, North Gyeongsang, still home to Korea’s oldest pottery furnaces, erected in 1843, and built a new furnace in nearby Mungyeong. The site is now one of 10 historic pottery workshops in a cluster called Yeongnamyo.

But the move, which came when Baeksan was 41, wasn’t easy. “I was lost and couldn’t sleep, worrying about how to raise four daughters and one son in that situation.”

His answer was to keep working. The artisan didn’t have the money to hire help, so he mixed the clay and lit the fires himself.

The hard work eventually paid off. When a Japanese businessman took an interest in Baeksan’s work at the 1984 Seoul International Trade Fair, Baeksan gave him a piece free of charge. A month later, the businessman returned and bought 10 more pieces for 100,000 won ($87.68) each. Then everything seemed to fall into place. Baeksan won the Special Prize at the 13th Transmitted Industrial Arts Exhibition in 1988, was named a Master Craftsman in 1991 and was designated an Intangible Cultural Property in 1996.

Baeksan credits his adherence tradition for his success.

“To be honest, the reason I didn’t change from a firelit furnace to a gas furnace was because I didn’t have the money back then,” he says. “But that was when I didn’t realize the beauty derived from old-fashioned ways.”

In 1993, the governor of Mungyeong suggested Baeksan finally make the switch to gas with government funds.

“The governor said no tourist would pay several hundred million won for pottery,” the potter said. “I answered, even if you sell 100 pieces for 5,000 won each, it only adds up to 500,000 won. This not only thrashes the quality, but the money isn’t even worth it.”

As evidence of the higher quality of firelit work, Baeksan points to a white porcelain jar with a grapevine design in a cobalt blue underglaze.

“We draw our own designs,” he says. “It may not be as intricate as artists’ works, but in it we find real art and fun.”

Now it’s up to Baeksan’s son Woonam to carry on the family legacy. On track to become an officer after graduating from the Korea Military Academy at Young-Cheon, in Yeoncheon, North Gyeongsang 15 years ago, he decided to become a craftsman instead.

“Even if my father taught me all there is to know, it’s a very difficult task,” says Woonam. “I understand all of his teachings, but the actual practice is left up to me.”

He admitted that it took him over three years to make a single jar that was up his father’s standards. Woonam helped his father in the afternoons and practiced in the evening, hardly ever leaving the house.

“I wasn’t even able to keep a drink down knowing that I was a potter who couldn’t even make a jar right.”

Now he hopes to combine modern details with traditional techniques. “This business won’t last long if we only stick to old styles,” Woonam says. “We need to take the positive aspects of traditional methods and incorporate modern design to form a new tradition.”

In order to do this, Woonam entered Kyungil University graduate school in 2009 and is studying modern pottery. He has already invented a new method of making white ceramic moon-shaped jars. Woonam was named a “new Korean intellectual” by the Small and Medium Business Administration in 2006 and has patented a new way to make glaze out of red clay.

As the first pieces of 2010 start to take shape, Woonam has begun to hear complaints about pollution from the furnace. But he’s not worried.

“We had this dispute with the Ministry of Environment about 10 years ago,” says Woonam. “It’s fine. Any harmful substance is eradicated in the 1,300 degrees Celsius [2,400 degrees Fahrenheit] heat.”