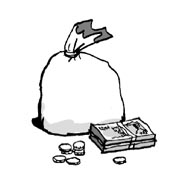 It is said that the I.Q. of a poor father is lower than that of a wealthy father. Then, what determines a child’s intelligence - genetic inheritance or family background?

Eric Turkheimer, a psychology professor at the University of Virginia, argues that a family’s wealth has an absolute effect on the I.Q. of a child. Turkheimer pointed out that the research which claims that I.Q. is all about genetics was mainly done on middle-class families. He conducted new research and found that the I.Q. of a child from a poor family improved 12 to 18 points after the child was adopted into a wealthy family, giving weight to his theory.

Of course, there is no reason to believe that you need a high I.Q. to succeed. Hard work can be more important than I.Q. in getting ahead in the world.

The rule of 10,000 hours is a good example. In order to get really good at something you need to spend 10,000 hours on it. If you spend 20 hours weekly on it, that means 10 years of practice before this is achieved.

Even Wolfgang Amadeus Mozart, a genius in music, composed his Piano Concerto No. 9, the one praised as a masterpiece, only around 10 years after he started writing music. Kim Yu-na started figure skating at the age of 7 and became the World Junior Champion roughly 10 years later in 2006.

But it is not that easy for a child to make such great efforts alone. Like Mozart’s father and Kim Yu-na’s mother, children need parents who constantly help them at their side. If they are robbed of their time for making money or taking care of household chores, it will be difficult for them to succeed.

In short, it is not a surprise that children from poor families are likely to remain poor later in life. Except through the occasional donations or inheritances, wealth is transferred from generation to generation through investments in education.

This is the reason why Scandinavian countries - where all citizens can get good, quality public education, regardless of one’s family background - have one of the lowest rates of passing down wealth to their children.

Recently, the Korea Development Institute published a report which says that Korea’s rate of passing down wealth to children is even lower than that of Scandinavian countries. The KDI explains that this is because the level of education of children from all classes is high in Korea due to a zeal for education, and that high-quality jobs are created thanks to rapid economic growth. However, the average age of the children surveyed is the mid-30s and their parents are in their late 60s.

It is clear that one’s success in life is greatly dependent on one’s education. In order to make education play the role of a ladder for social upward mobility, instead of a channel for passing down poverty from generation to generation, it is urgent that we increase the quality of public education. Creating a society where talented people rise up from humble families depends on education.