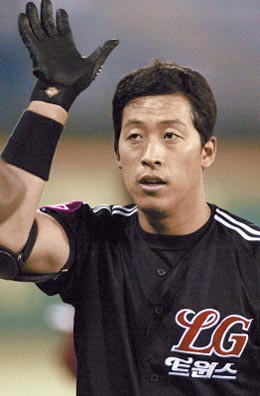 Outfielder Lee Byung-kyu and the LG Twins are close to reaching an agreement on a two-year deal. According to team officials, the two sides are making progress in contract negotiations, and the 35-year-old veteran - who is coming off a three-year stint with the Chunichi Dragons of the NPB - is expected to sign with the Twins within a matter of days.

“I met with Lee on Jan. 5. We are going over the details of incentives and the talks are delaying the process, but we should be able to announce the acquisition of Lee sometime this week,” said Lee Young-hwan, director of the LG Twins.

Having broke into the KBO with the LG Twins in 1997, Lee went on to play with the Twins until the end of the 2006 season. Lee signed with the Dragons and played for three seasons with the NPB club, but he failed to make much of an impact. Lee then showed interest in returning to the Twins, which was one of the few teams willing to enter contract negotiations with the aging veteran outfielder.

Twins officials and Lee met on two different occasions during the off-season. At the first meeting, LG officials were able get confirmation of Lee’s interest in returning to the Twins. While the two sides began talking about the details of a deal - including the duration and amount - Lee reportedly insisted that he wanted to be compensated like a star player. LG, however, is weary of the player’s age and concerned about whether the veteran could put up top numbers for the team.

In the end, LG offered Lee a two-year contract with several incentives and waited for Lee’s response. Although Lee does not have a problem with the duration of the contract, he is looking to secure a larger amount of guaranteed pay with fewer incentives. The two sides met again on Tuesday to discuss the matter.

“There isn’t a problem with the total amount listed on the proposed contract,” said Kim Jin-chul, manager of the club’s scouting department. “The problem for Lee is the incentives. Lee will not only have to play the entire season, he will have to play up to expectations in order to collect on his bonuses. Having said that, if Lee manages to fulfill all the requirements for the incentives, he can end up collecting more than the amount he has proposed to the team.”

The Twins are said to have set the bar with Lee’s past record in the KBO in mind. Lee has a career batting average of .312 in the league. As such, Lee will be expected to produce a similar average in the upcoming season. Considering the player’s age and the cost of bringing such a high-profile player back to the team, LG is taking measures to protect the club from giving an aging veteran a big contract.

“I have been informed of the proposed incentives from the Twins, and there are quite a lot,” an LG official said. “There are so many, I can’t even remember them all.”