Team heads straight to the field at camp

Team heads straight to the field at camp 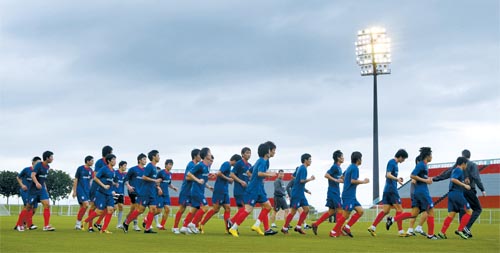 The national football team warms up for practice, jogging around the grounds of Olympia Park Stadium in Rustenburg, South Africa yesterday. [YONHAP]

RUSTENBURG, South Africa - It’s the high altitude that brought the national football team on Tuesday to this small city on the Highveld Plateau in northwestern South Africa, a place where manager Huh Jung-moo and his coaching staff can get in some practice for this year’s World Cup, and separate the wheat from the chaff in determining the final roster.

The team arrived at about 5 p.m. in the city, located 1.25 kilometers (4,100 feet) above sea level. Despite the long flight, the 25 members - 22 K-League players and three from the J-League - gathered for the their first practice that same evening at Olympia Park Stadium.

“The ball travels a lot faster, and I think I got fatigued a lot easier out there. It’s definitely different,” said defender Cho Yong-hyung of Jeju United about the high altitude.

“It was the same training routine, but I was out of breath a lot sooner than usual. The practice was tougher than usual,” said veteran goalkeeper Lee Woon-jae of the Suwon Bluewings.

Taking the long flight into consideration, the session was a bit lighter than usual. Players were put through a series of stretches and warm-up exercises, then came passing. The team committed more errors than usual because of the ball’s increased speed.

Using a quarter of the stadium’s field, the national team divided into two groups and went through a takeaway exercise in which defenders attempted to intercept the ball as several players passed it around. While the players looked lively early on, they slowed down considerably by the second half of the exercise.

“I’m sure our players got a slight sense of what it feels like to play in a high-altitude environment. There are players who perform well in such an environment and those who don’t,” manager Huh explained. “Players who are not fazed by the high altitude will be favored for the final cut.

“We have a lot of time to get acclimated to the environment. Since our overseas-based players have been excluded, we will have to conduct our training camp with less than half of the members we are considering for the 23-man World Cup roster,” Huh said. “During the three friendly matches [scheduled during the trip], we will focus on the players who adapt quickly and play well.”

The scene at Olympia Park Stadium was a contrast to the peaceful streets of downtown Rustenburg - and the two were separated by tight security, evidence of how seriously the city is taking the team’s visit. Ten police patrol cars and a crowd of patrol officers and private guards roamed the area outside the stadium, while, 10 security officers patrolled their designated areas.

The team will receive top-level police escorts and protection throughout their stay in Rustenburg. From the moment the team steps out of Hunters Rest Hotel, approximately 20 patrol cars and over 100 officers stand ready to accompany them.

“A total of five patrol cars escorted our buses to the stadium. In addition, there were officers on the road who directed traffic and prepared to provide security in case of an incident,” a KFA official said.

Matthew Wolmarans, Rustenburg’s mayor, made a surprise visit to the practice and pledged to support the Korean national team through a successful training camp.

“I want to thank you all for choosing Rustenburg as your base camp during the World Cup. We will support the Korean national team to the best of our abilities during the training camp, as well as the World Cup, so that Korea can have a successful run,” Wolmarans said.