Innovations in Korean architecture on display

Innovations in Korean architecture on display 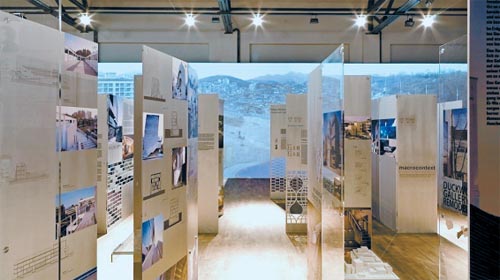 The Megacity Network exhibit at the Deutsches Architekturmuseum in Frankfurt, Germany Provided by the National Museum of Contemporary Art

High-tech products from Korea such as mobile phones, flat screen televisions and semiconductors have gained widespread recognition in the world but modern Korean architecture is relatively less well known.

A locally programmed exhibition that toured around Europe to promote Korean architecture has just returned to Korea for a show at the National Museum of Contemporary Art, Korea in Gwacheon, Gyeonggi.

The exhibit shows works of architecture that have been inspired by trends in modern architecture in Korea and abroad.

“The Megacity Network exhibit is a metaphorical expression of the potential connections between the works of Korean architecture that are scattered around large Korean cities,” said Kim Sung-hong, the curator. “The exhibit shows the innovations in and possibilities for contemporary Korean architecture, which has been overshadowed by architecture from Japan and China. I also wanted to show that the problems we face as East Asian architects are no different from those of our Western peers.”

A total of 16 architects and architectural firms are featured in the exhibition including Kwon Moon-sung, Kim In-cheurl, Lee Chung-kee, Chung Gu-yon, Hwang Doo-jin, Space Group and Junglim Architecture. Their works range from high-rise apartment buildings and hospitals to museums, libraries, stadiums and churches. In the exhibit, the works are shown in various stages of development through blueprints, photographs and building models.

Sirp, an Estonian cultural weekly, wrote of the exhibit at the Museum of Estonian Architecture in Tallinn: “We drive Hyundai cars and use Samsung television sets and LG mobile phones but we didn’t know much about contemporary Korean architecture, which is being introduced through this exhibit.”

Frankfurter Neue Presse wrote that the Korean architects “have found their own style between tradition and modernism.”

During the exhibition, there will be a series of lectures that provide a closer look at the works on display. Peter Cachola Schmal, the director of Deutsches Architekturmuseum, will speak about Asian contemporary architecture in the eyes of the Europeans between 1 p.m. and 3 p.m. on Wednesday, Jan. 13. Architects featured in the exhibition will speak on Jan. 20, Jan. 27, Feb. 10 and Feb. 27.