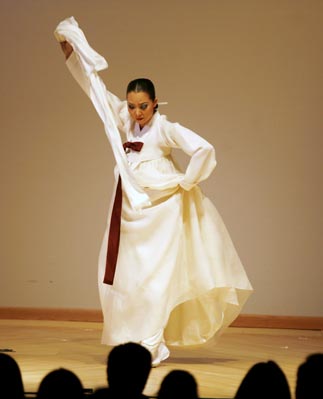 Junglan Bae of the Washington Korean Dance Company performs “Sal-pu-ri” at the Smithsonian National Museum of American History in Washington, D.C. on Jan. 13. The dance is intended to console the departed who died in regret without fulfilling their missions in life. The performance was part of celebrations for Korean-American Day 2010, the 107th anniversary of the arrival of the first Korean immigrants to the U.S. [REUTERS]