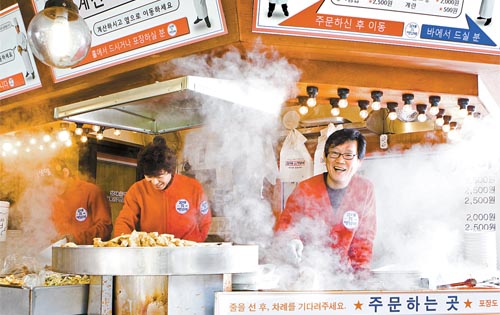 The Hongik University area, or Hongdae, is one of the most popular destinations in Seoul for clubbing and affordable dining, not to mention it’s the place to catch up with - or set - the latest trends. Some business owners say about the neighborhood, “If you can make it here, you’ll make it anywhere.” But one of Hongdae’s tastiest assets is surely its diverse variety of street vendors, who sell snacks to students during the day and chow to hungry young clubbers at night.

And it’s not just the typical spicy Korean fare - this is a global neighborhood for Korea’s globalized youth. Takoyaki octopus batter balls are sold next to crepes, Japanese ramen, curry rice and other dishes new to the Korean market. These vendors often work out of remodeled trucks with signboards and decorations - a cut above the handcarts and shabby-looking trucks that crowd the streets.

And as Korea’s most popular clubbing area, Hongdae also has an alcoholic innovation: takeout wine and cocktails - just like takeout food.

Below is a list of some new Hongdae global street food vendors.

Almost everyone has their own favorite tteokbokki place, and one of the most popular street stalls is located in Hongdae. It’s called “Gangster Tteokbokki.”

The vendor’s vehicle was once located in Juchajang Golmok, a small alley near a parking area, but it recently opened its first store nearby. The vendor has been selling tteokbokki in Hongdae for the last 20 years without even a sign or a board, but after a few people started naming the stall Gangster Tteokbokki, the name stuck. The place got its intimidating moniker because of its owner, Yoon Tae-myeong, who is known for the ostentatious gold chains around his neck, the ominous tattoos all over his body and his general rudeness toward customers. Then again, his strange reputation is all part of why Yoon has enjoyed such huge success in this neighborhood that thrives on eccentricity.

“In early days of my business, I got involved in numerous fistfights and arguments with drunken customers who demanded that they get their orders first, and that’s one reason the word ‘gangster’ became a nickname for me,” Yoon said.

Yoon started his business with one stall in 1987, in a narrow alley near a parking lot by the college. With an almost endless stream of customers on any given evening, dealing with drunken customers became part of his job.

“There were several incidents where I unintentionally got caught in a fight with drunken customers and had to go to the police. It was since then that rumors that I might really be a gangster started spreading,” Yoon said.

That gossip has only increased traffic to the stall - and it seems Yoon has finally trained his customers. None complain about Yoon’s rude behavior, and even those who are drunk stand in line patiently to wait for their turn. This is part of why Yoon never had a problem with his nickname - it’s the main reason for his success.

Korea’s now trending from a chaotic service paradigm to a Western one, where the waiter presents the diner with the bill at the table - but you’d be forgiven for thinking things had regressed at Yoon’s store, which operates based on self-service. Customers pour their own fish cake soup and return the dishes after they’re done.

So why are hundreds of customers here willing to endure these inconveniences? Yoon replied that people love the “original and one of a kind taste” of his tteokbokki.

To Gangster Yoon, loyalty is the highest virtue. His cozy tteokbokki store is home to a total of 15 workers, and Yoon said he intends to continue the business with the workers who have stuck with him for many years.

“I am very thankful to my friends who have stood by me for the past 10 years,” Yoon said. “The success of Gangster Tteokbokki is thanks to the loyalty of these ordinary men.”

*Go to Hongik University Station on line No. 2, exit 6, and ask for Juchajang Golmok (parking alley).

Just in front of Hongik University, there is a popular alley known for its dessert cafes. In this alley is a blue van that sells “street crepes.” Decorated to look like a cute cafe, this van is owned by Song Hui-na. She was inspired to start a crepes business after she went on a trip to France to study baking. The most popular item is the Banana Nutella Crepe, which costs 3,500 won ($3.10). Crepes are made by pouring a thin liquid batter onto a hot frying pan or flat circular hot plate, often with a trace of butter on the surface. Then the chef adds chocolate cream and fills the crepe with chopped up bananas. Song is particularly proud of her crepe recipe, and emphasizes its contribution to the flavor of the crepe.

“Crepes are convenient to eat on the street. There are many regulars,” Song says.

*From Hongik University Station, take exit 4 and head toward the alley near Seokyo Elementary School. Crepe van Dodona is open everyday from 4 p.m. to 10:30 p.m. and closes during rain or extreme cold. 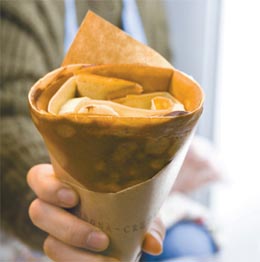 This popular yellow taco truck is famous for its delicious spicy sauces. The truck’s namesake, the habanero chili pepper, is one of the spiciest peppers in the world.

Jeon Gi-nam, the owner of the truck, worked as chef in the United States until six months ago, when he returned to Korea and opened Habanero.

Jeon created his own recipes based on Mexican ones to better suit the palates of Koreans. Due to the food’s addictive taste, there are many regulars who visit the truck five times a week, Jeon said. The salsa bibimbap is one of the most unique dishes - a mixture of rice, cheese, meat and vegetables in a portion more than large enough to eat as a meal.

“Although it is just street food, I want to provide my customers with food that tastes like it’s of the highest quality,” Jeon said while preparing ingredients.

*Turn into the alley of Seokyo Elementary School and head toward cafe alley. Habanero is open from 4 to 11 p.m. 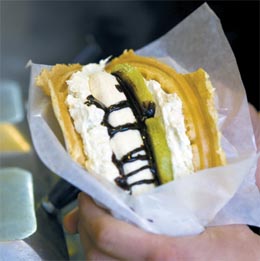 A whole waffle covered in half a kiwi and a whole banana, cream dripping from the sides - it's hard to believe this costs only 2,000 won.

It's the taste and price that draws crowds to Waffle Pogeun. Instead of ordinary whipped cream, the cream here is handmade by the owner with fresh yogurt. The syrup (available in strawberry, apple and chocolate) drizzled over the waffles is also made by the owner. A basic waffle with yogurt cream runs 1,000 won, with an additional 500 won with almond powder and more. There are a total of six different selections to choose from.

Most recently, a sweet potato mousse waffle (1,500 won) has been added to the menu. Each waffle is cooked to order, so you may have to wait about five minutes.

*From Sinchon Megabox near Sinchon Station, line No. 2, head toward Yonsei University. Waffle Pogeun is located next to the Sushi Gallery. It is open from noon to 10 p.m.

With no blender, salted glass or balmy weather, it's not what Californians may be used to, but Margarita Splash is still the best one can do in the Hongdae area.

These takeout cocktails, in margarita and sangria varieties, come in colorful bottles and plastic cups. The margarita is made with fruit juice, tequila or vodka, and contains between 3 and 4 percent alcohol.

The Margarita Classic and Green Apple Margarita are the most popular, priced at 8,000 won for a 750-milliliter bottle and 14,000 won for 1.5 liters. The sizes may seem hefty, but because of the (relatively) low alcohol content, they're a favorite for casual club cruising.