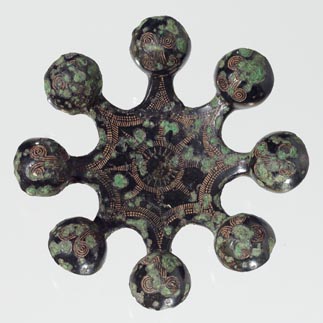 This artifact is an important find in that none like it from this time period has ever been uncovered. Bells like these are often found in pairs, suggesting that they were held in each hand, most likely for a traditional ritual. Historians also believe it was used by a powerful figure - a shaman, for instance - who sought power through sound, among other devices.

This artifact was unearthed from a tomb in Hwasun County, South Jeolla, along with other relics such as a mirror engraved with small patterns and a dagger made of bronze, among other items.

The bells, mirror and the dagger are all engraved with patterns that consist mostly of dots and dotted lines, providing further evidence that they were used together for rituals.


*The photos and text for Treasure Trove are provided by the National Museum of Korea. For more information, call (02) 2077-9000 or visit www.museum.go.kr