Symbols of power in the age of innocence

Symbols of power in the age of innocence

Newland Archer, a handsome lawyer and heir to an upper-class family in New York City in the late 19th century is expecting a well-matched marriage with a beautiful young lady from an equally affluent family, May Welland. Then, Countess Ellen Olenska, May’s cousin, enters the picture.

Ellen was living in Europe following her marriage to a Polish count, but has left her abusive husband and returned to America. When she arrives, she receives a cold reception from the conservative social circle to which she belongs. Yet she still plans to go ahead with her plans to divorce her husband, an act that was essentially forbidden at the time. Ellen’s family is strongly opposed to the plan, believing it would bring them disgrace, and asks Newland to dissuade her from the divorce. He agrees, but comes to feel a fascination and sympathy for Ellen as he watches her fight the constraints of society by herself.

This is the plot of the 1993 film “The Age of Innocence,” based on the Pulitzer Prize-winning novel by Edith Wharton of the same title. When Martin Scorsese said he would direct the movie, many were surprised, because the director was known for his tough movies about the back streets and underworld of the New York he once knew, and not for elegant period pieces about romance. When asked about his decision to direct the film, he replied that it was his intention to depict the subtle forms of violence and cruelty that such a society could bring to the individuals therein.

I think Scorsese achieved his goal brilliantly, mainly through the film’s visual elements. The scenes capture the splendid interiors, table settings and clothing of the late 19th century in such exquisite detail that it is astounding. And even as they succeed at delighting the eye, their greater triumph is perhaps their ability to convey the feeling of pressure that such elegant and well-arranged things can transmit to people.

A few of these things represent Ellen’s and Newland’s resistance against this strict order. One of them is a painting in Ellen’s house. The paintings in the mansions of the elite families in the film are rather modest, yet pleasant, paintings by James Tissot, Lawrence Alma-Tadema and other painters of the day. In Ellen’s house, however, there is a painting that shows a creature with the face of a woman and the body of a leopard affectionately rubbing its cheek against the cheek of a bare-chested young man.

The original painting is a work by the Belgian symbolist Fernand Khnopff (1858-1921) and is called by various titles: “Art,” “The Caress” or “The Sphinx.”

Sphinx? Is the painting depicting the monster from Greek mythology which has a lioness’ body and a woman’s head and the hero Oedipus, who defeated the Sphinx by solving its riddle? I have never heard that Oedipus had an affair with the Sphinx, though I do know that he inadvertently married his own mother, later giving birth to the psychoanalytic concept of the “Oedipus complex.” 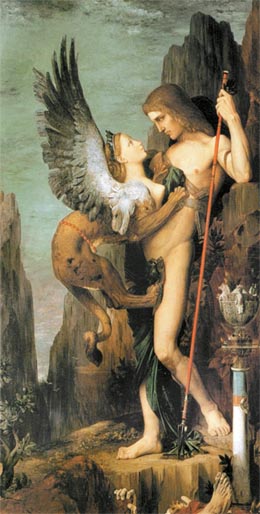 As far as I know, all the paintings with Oedipus and the Sphinx made until the mid-19th century were faithful to the original myth. The two characters stood apart from each other in those paintings, assuming a combative stance as the riddle was given and received.

Then, Gustave Moreau (1826-1898), a French artist who was a pioneer of symbolist art, created a totally different and shocking painting about Oedipus and the Sphinx. In the painting, the Sphinx clings to Oedipus’ body and looks upon him as though she would seduce him. Oedipus glares at her, holding his spear tight, which I think shows he is resisting the lure of temptation with all his strength. In this painting, the Sphinx is no longer just a monster - she appears as a femme fatale who overwhelms men with her charms and sways their fates, which was a theme greatly embraced by artists of the 19th century.

But it is very strange to me how these artists came to the idea of portraying the Sphinx, who in the original myth just sits on a cliff and delivers her riddle, as a femme fatale, whereas I fully understand the idea of portraying mermaids who sing enchanting songs in that way. I guess that the artist could have been influenced by the anthropologists of their time, who linked the Sphinx to images of powerful women in the primitive ages.

Johann Jakob Bachofen (1815-1887), a Swiss anthropologist and sociologist, said in his book “Mother Right” (1861) that the human race shifted from the matriarchy of primeval times to patriarchy, pointing to the powerful Sphinx as one of the symbols of matriarchy. Well, the famous riddle “What goes on four legs in the morning, on two legs at noon, and on three legs in the evening?” is not just a riddle but is also a meaningful metaphor for the human life cycle. Some anthropologists of the late 19th century said that in primitive times it was women who held a monopoly on the secrets of nature and human life cycles. When Oedipus solved the riddle, it signified an end to the monopoly and a shift of power from women to men, they said. If the feminist artists of our day were to paint the Sphinx based on that theory, they would surely portray it with more magnificence and dignity.

Male painters from the 19th-century like Moreau, however, seem to have focused on the anxiety and mixed feelings of hatred and sensuality that the powerful image of the women, according to the theory, aroused in men.

During those times, there were many paintings showing the Sphinx as a femme fatale. Among them, “The Sphinx” by Khnopff is very special. It does not have the strong sexual tension as the other Sphinx paintings of the time; the two figures do not face each other but stand side by side and their faces are strangely similar to each other.

Michael Gibson, an art historian, said in his book “Symbolism” that the man in the painting is an artist, who represents Khnopff, not Oedipus, and that the Sphinx is both the artist’s imagination and his other self. It is also interesting that the face of the Sphinx is modeled after the artist’s sister. Khnopff used his sister’s face in almost all of his paintings, leading many people to wonder: did he love his sister as his anima and his other self?

Let’s return to The Age of Innocence. In one scene, Newland stands before the man in the Khnopff painting, while Ellen stands before the Sphinx. Although Ellen is not a typical femme fatale, she can be identified with the Sphinx because she has a strong spirit and is actively resisting society’s strict rules. And Newland can be identified with the man in the painting, who has an indecisive and melancholic look on his face, because through Ellen he is discovering his own defiant self. He is fascinated with her and at the same time hesitant to accept her because of the social restrictions under which they both live.