A night among the ancestors

A night among the ancestors 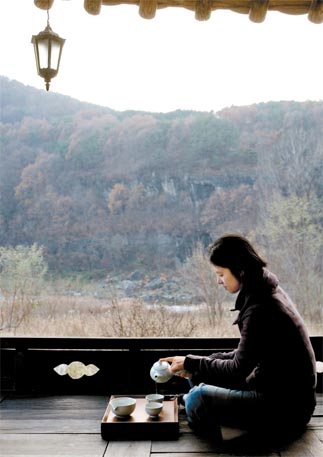 Visitors to Nongam House can drink a cup of buckwheat tea on the wooden porch as they enjoy the view of the Nakdong River flowing by. By Studio Lamp

Most people here would swear nothing drives away the winter chill like lying down on the warm floor of a traditional Korean home with a loved one or a good book. If there’s a beautiful view out the window, so much the better.

That’s exactly what the owners of Korea’s traditional mansions-turned-hotels are counting on. With 108 of these historic buildings providing accommodation through the Korea Tourism Organization Web site, there’s never been a wider range of options. Some show their long history on the surface, their ancient wooden structures a testament to old-fashioned craftsmanship, while others offer the comfort of modern technology along with a classic look.

Foremost in the former category is Nongam House, the oldest house in Korea, located in Andong, North Gyeongsang. It’s been about six centuries since the home was built, and 17 generations of families have lived in it, making it a museum of lifestyles long gone. 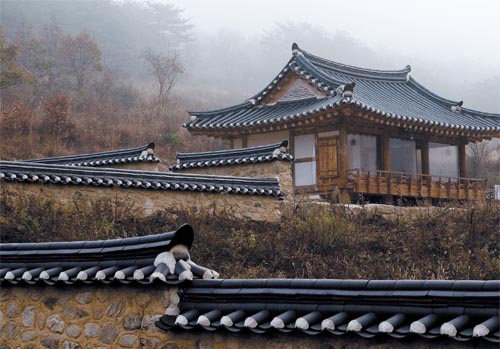 Lee became a well-known writer with masterpieces like “Eobusa,” or “Fisherman’s Song,” a paean to the simple life.

So it’s not surprising that the house Lee built could inspire a poem or two.

Removed from any major roads, it still bears an air of seclusion. The Nakdong River flows by the front of the house, with wide white sandy beaches. In the fields, a solitary cow leisurely grazed as Lee Seong-won, the eldest living male descendent of Lee Hyeon-bo, spoke about his ancestral home.

“I want to use this place not just for lodging but a place where I can teach people about Korean traditional life,” Lee Seong-won said.

The house, covering 6,600 square meters (1.6 acres), is shaped like the “d” consonant in the Korean alphabet. About 30 meters (98.4 feet) away from the house, there is an annex with four small rooms called Bungang Seowon. It is said that Lee Hyeon-bo would read and write here, and the building was later used as a school for Confusion scholars.

Inside each room are two sets of blankets, a janggi board and a tea set. Although the 600-year-old house may not have TV or the Internet, it has individual bathrooms as well as heat and air conditioning.

Those modern conveniences may be a disappointment to visitors hoping to live as Lee once did, but ironically it’s simply too costly to continue heating the floor with firewood the traditional way.

Before having dinner, guests enjoy tea on the wooden porch, with a perfect view of the Nakdong River. The buckwheat tea is made from grain grown by Lee Seong-won himself.

Dinner is a feast of traditional Korean cuisine cooked by the female heads of the household, Lee’s mother and wife. They prepare about eight different side dishes, accompanying a stew made with dried radish leaves. All the ingredients are fresh and many are local, including mackerel, which Andong is known for. The meal ends with sungnyung, the boiled crust of overcooked rice that usually remains at the bottom of the pot.

Cooking is not allowed around the main building of the house due to the danger of fire, but there is a grill available nearby if visitors want to enjoy a picnic.

The day ends with a game of janggi, sometimes called Korean chess, or yut, a traditional game played with eight sticks that are thrown like dice to move across a board.

Wake up the next morning to the chirping of birds in the distance, and the doors made from traditional Korean paper open to reveal the natural beauty of the mansion’s garden.

Here Lee Hyeon-bo and his close friend and fellow scholar, Lee Hwang, walked and discussed literature and politics - an experience you can replicate. It’s also where Lee Hwang wrote his famous poem “Dosansipigok,” about a life oriented toward nature.

Visitors can also enjoy other traditional activities with the guidance of the owner.

Traditional cooking is one example. With reservations required to give the owner a chance to arrange the proper ingredients, guests can learn to make the sweet rice beverage sikhye, songpyeon rice cakes and Andong noodles.

Most people may head to old houses like Nongam to experience life away from everyday worries. And if Nongam is full or too far, there are many other houses like it available across the country. The Ocheon Gunja town, also in Andong, is home to many different types of old mansions.

If you’re in the mood for cultural activities, go to either Andong Suaedang or Bukchon Hanok Village in central Seoul. A stay at these houses usually ranges from 50,000 to 200,000 won ($44 to $176) for one night. Lodging at Okyeonjeongsa, also in Andong, which provides higher-end services, is slightly more costly, priced at up to 280,000 won for a six-member family.

For more information on traditional mansions and to make reservations, either contact each house directly or go to www.visitkorea.or.kr to make a reservation online. Reservations are recommended at least a month ahead of time. For more details on the Nongam house, visit www.nongam.com or call (054) 843-1202.