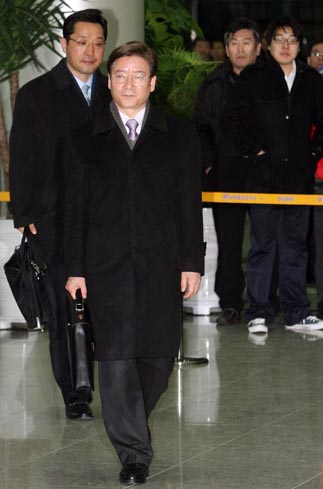 Officials from the two Koreas sat down yesterday to discuss the state of their joint industrial site, just days after North Korea launched artillery into the Yellow Sea near South Korean waters, heightening tensions on the peninsula.

The first government-level meeting of the year between the Koreas is meant to address how to improve the Kaesong Industrial Complex. But yesterday, representatives from Seoul and Pyongyang struggled even to narrow differences about the agenda.

Late last month, the two Koreas held a three-day conference on Kaesong as a follow-up to their joint trips through industrial bases in China and Vietnam in December. During that meeting, the two sides agreed to talk in February. However, by press time last night they remained far apart on what needs to be discussed.

The two sides remain far apart on cross-border trips. Currently, South Koreans must sign up for travel to the North only during designated time slots between 8:30 a.m. and 5 p.m. The South wants to eliminate these restrictions so that South Koreans can travel at any time during a given day. North Korea countered that this and other border issues must be discussed at military-level talks. The North had asked that a military meeting be held on Jan. 26, but the South said it should take place after the Kaesong talks.