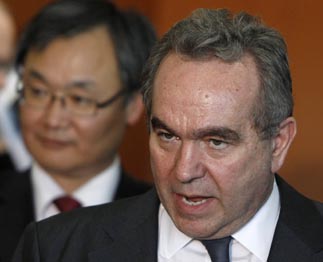 Speaking to journalists in Seoul after his meeting with Lee Yong-joon, South Korea’s deputy foreign minister, Campbell stressed that, “What’s essential ... is to make very clear to our North Korea interlocutors that the essential next step is really the six-party talks, not discussions on other matters.”

Referring to the North’s desire to negotiate a peace treaty to replace the armistice that ended the Korean War in 1953, Campbell said, “It’s possible to have discussions on other matters within the six-party framework. But that six-party framework is essential going forward. Within that context, I think there are a number of things that can be discussed, of a political, strategic, economic and financial nature.”

He added that he welcomed the South’s efforts “to reach across the divide to North Korea” and said Washington and Seoul remain “in close consultation” over the South’s preparations for an inter-Korean summit.

“They [South Korea] consulted with us in advance of ideas associated with the comprehensive outreach to North Korea,” he said. “We support that effort. We’re working as closely together as possible.”

Regarding the transfer of wartime operational control in 2012 from the United States to South Korea, Campbell said Washington, as a “strong partner of South Korea,” takes Seoul’s concerns seriously and that the most important step will be “to reassure our partners of the seriousness of our commitment now and into the future.”

Kim Tae-young, the South’s defense minister, said last month that receiving wartime control in 2012 would be “the worst-case scenario for the military,” because North Korea might by then have full nuclear capability beyond the South’s ability to combat it.