U.S. envoy’s remark on control stirs up a furor

U.S. envoy’s remark on control stirs up a furor 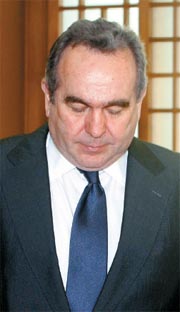 What was intended as a passing remark by a U.S. diplomat visiting Seoul caused a furor in South Korean media, and the Foreign Ministry here has been busy trying to downplay its significance.

Kurt Campbell, the U.S. assistant secretary of state for East Asian and Pacific affairs, who is visiting South Korea this week, said Wednesday that he was aware of South Korean officials’ concerns over receiving wartime operational control from the United States in 2012.

A deal was reached in 2007 to shift the command to the South Korean military. But conservatives here have expressed qualms about retrieving the control for fear of creating a security vacuum. Last week, the South’s Defense Minister Kim Tae-young called the move “the worst case scenario for the military” because the North could bolster its nuclear capability by then.

The year 2012 is also considered sensitive because it is the year of presidential elections for both South Korea and the United States. North Korea has been running a national campaign to become a powerful and prosperous state by 2012. The U.S. military has insisted that giving back the wartime command won’t mean a lessening of its commitment to the South.

Against this backdrop, Campbell said, “As a strong partner of South Korea, we take some of these concerns seriously.”

His comments were interpreted as showing the U.S. willingness to renegotiate the terms of the transfer.

In his meeting with Foreign Minister Yu Myung-hwan yesterday, Campbell expressed his “surprise” at the media coverage of his words, according to ministry spokesman Kim Young-sun.

“He said he was taken aback that his words were linked to a review of the wartime command transfer,” Kim said. “Campbell said he only meant to say that he was fully aware of various opinions on this issue.”

Kim also stressed that when Campbell on Wednesday sat down with his counterpart, Deputy Foreign Minister Lee Yong-joon, they never had any discussion on the timetable of the transfer.

“They merely reaffirmed where they stand on the issue,” Kim said.

Lee himself later explained, “South Korea and the United States share common thoughts and understanding on this issue and there aren’t any outstanding differences at this point.”

A diplomatic source said Campbell’s comments may have been blown out of proportion. “It may have simply been some diplomatic rhetoric,” the source said. “It was just Campbell being the diplomat that he is, saying he knew about the concerns.”