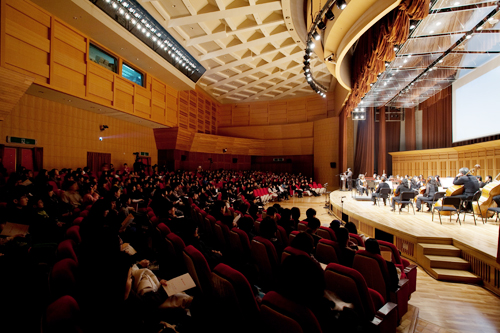 There’s a famous saying that goes, “Men are not to be measured by inches.” Well, neither are concert halls. For certain things, bigger does not always mean superior.

These days, smaller concert halls around Seoul are in the limelight, gaining recognition for their impeccable acoustics and intimate feel.

“Reducing the distance between the stage and the audience while also raising the ceiling improves the acoustics,” said Im Woo-seung, director of the KT Chamber Hall’s sound department.

These smaller spaces may not attract as much attention as larger ones such as the Seoul Arts Center or Sejong Center for the Performing Arts, but they are spread out all over Seoul, which makes them easily accessible no matter where in the city you live.

At the southern end of the Hannam Bridge, a small, 186-seat concert hall lies hidden behind the many schools and embassies on the tree-lined streets. The Ilshin Hall grew in stature when it hosted a small concert by renowned half-Korean violinist Stefan Jackiw prior to his debut recital in Korea. In the hall, the clear tones of Jackiw’s violin had a resonance that would not have been possible in a larger venue.

Kim Young-ho, the chairman of the Ilshin Spinning Company who established Ilshin Hall, said that he had long dreamed of opening a concert hall. “I took a good look at many of the finest concert halls in Europe and the U.S., came back and built a hall that would produce a powerful sound and good music,” Kim said.

The fan-shaped, 450-seat KT Chamber Hall stands in the midst of apartment complexes in Mok-dong, western Seoul. Every other week, the chamber hall holds a “Saturday Afternoon Chamber Concert.” All of the concerts are presented with an explanation by pianist Kim Yong-bae, in attempt to bring classical music to the public, according to the KT Chamber Hall’s Web site.

Lee Suk-chae, the KT president, said he came up with the idea for the concert hall as a way to put idle spaces to use as cultural institutions.

The 250-seat Olympus Hall will open next month amidst a forest of high-rises in Teheran-ro, southern Seoul. Thirty percent of the construction expenses were dedicated to improving the hall’s sound quality.