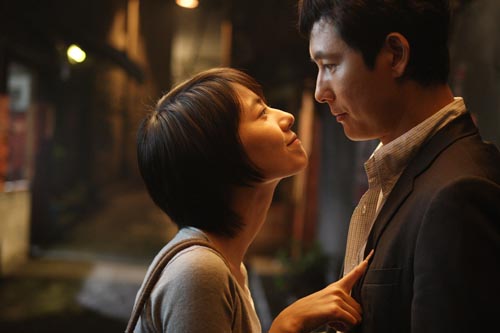 Speaking as one who’s been there, Chengdu, China, might not be the prettiest city in the world. But in “A Good Rain Knows,” director Hur Jin-ho manages to mold the city into a subtly exotic backdrop of a bashful romance.

Creating a mood through scenery is one of Hur’s fortes, whether it is the bamboo forest in “One Fine Spring Day” (2001) or the shabby photo shop in “Christmas in August” (1998).

The movie is a joint production between production companies in Korea and China, and there were reportedly a number of requests by the partner firms in China that Hur include Chinese elements in the movie. The city might not have been Hur’s first choice but the director brings out a charming picture of the city including a scenic park dedicated to Chinese poet Du Fu and a city center where the old and young gather to dance.

Korean actor Jung Woo-sung plays Park Dong-ha, a Doosan employee on a business trip to the Chinese city. There, he meets May, played by Chinese actress Gao Yuan Yuan, a former college friend who works as a tour guide in Du Fu park, and the two have a brief romantic encounter there.

Picturing the statuesque Jung as a nine-to-five businessman is tough, which is probably why he is portrayed as a former aspiring poet who succumbs to the corporate life. In one scene, Dong-ha says, “Initially, I was just going to work [at the company] for a short time. But the checks came in, and I got promoted... and it got hard to quit.”

As such, Dong-ha’s uncertainty and disillusionment about his job translate well into the general awkwardness of his relationship with May. Except for some short lines spoken in English, there isn’t much dialogue throughout the movie. Rather more is said in the hesitant moments of silence between the two characters.

Unfortunately, the rest of the film doesn’t quite live up to the ethereal beauty of Hur’s Chengdu. The “joint” project fails to create harmony and instead, feels like a fusion dish gone bland. Reportedly, Hur’s team was asked to incorporate the Sichuan earthquake into the movie. This request becomes apparent, but not in a good way, when we see May’s pain after she loses her husband in the earthquake come off as strained and unoriginal.

Instead of telling Dong-ha the truth about her loss, May takes the route characteristic of Korean melodramas and keeps the secret to herself, lying to Dong-ha and saying she’s married. Later, we see May crying in front of her deceased husband’s picture.

With a female role that is contrived and the lackluster chemistry between the two actors, Hur’s talents in creating atmosphere is buried, with the audience left to wonder why the two fall for each other in the first place. Eventually, we’re too bored to care.