Enjoy the Lunar New Year holiday, in a different way

Enjoy the Lunar New Year holiday, in a different way 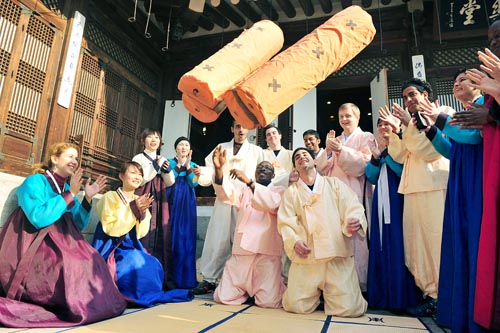 Holidays are times to reunite with loved ones, cement family bonds and immerse yourself in the tradition, local customs and history of the country.

But not everyone can - or even wants to - spend the upcoming Lunar New Year holiday this way. Perhaps you haven’t found a decent job and are embarrassed to be around your well-off brother in front of your parents. Maybe you live too far away from family members and can’t make the trek home because of distance or price.

Or you might just want to spend some time on your own, enjoying a rare three-day period where the hectic pace of life slows down.

While Seoul comes to a virtual standstill over the Lunar New Year holiday as businesses close and restaurants and shops shut their doors, you can still spend an enjoyable few days in the big city.

In fact, there are numerous holiday-focused events and activities to help keep you occupied.

If you find yourself looking for something to do this weekend, here are some ideas that will give you a taste of the holiday and a feel for Korean traditions - with or without the in-laws. 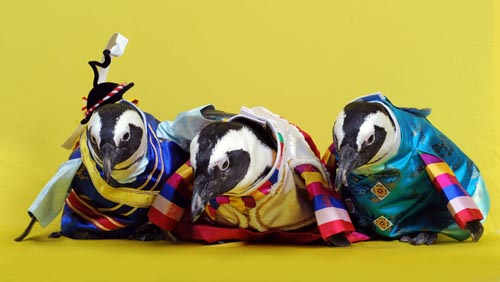 Penguins decked out in clothing worn by those performing nongak - or traditional Korean farmer’s music - will greet people visiting Everland, the country’s largest amusement park, during the holiday. [YONHAP]

Among them, a gut - a traditional Korean shaman ceremony meant to help usher in a prosperous and promising new year - will be held today at 3:30 p.m. It’s difficult to see these types of ceremonies in Seoul, as they’re more likely to be found in rural areas nowadays.

So you might want to put this at the top of your to-do list. Be sure to get there early to secure a good seat, as it will likely fill up fast.

Other events include those centered on making charms meant to bring you good fortune, smashing rice and crafting traditional toys such as kites and jegi, which resembles a shuttlecock and is used in a traditional game. 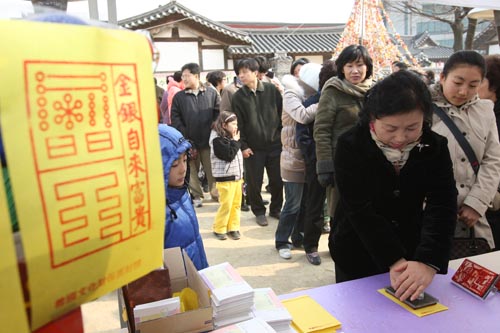 Catch some tunes at a free concert

Tomorrow, spend the morning walking along the Cheonggye Stream in central Seoul and then head over to the Korea Tourism Organization building for a free musical performance.

The KTO will host three free concerts of gugak, or traditional Korean music, by the quintent YESoul at 2, 4 and 5 p.m.

YESoul will play classical Korean music pieces along with pop songs using a Korean string instrument called a gayageum, a bamboo flute dubbed a daegeum and an hourglass-shaped drum known as a janggu. Along with the concert, you can get a Korean name and dress up in traditional clothing.

How to get there: Gwanghwamun Station, line No. 5, exit 5

For people who love old architecture and historical sites, this weekend presents a great opportunity to visit some areas that are normally off-limits. The Cultural Heritage Administration of Korea said it will open the Hamhwadang part of Gyeongbok Palace to the public so visitors can use the venue to bow to elders, a New Year’s custom centered around showing respect. The Hamhwadang was used as an office by King Gojong of the Joseon Dynasty. In order to get into the Hamhwadang, grandparents, parents and children must visit the palace together wearing hanbok, or traditional Korean clothing. Additionally, Changgyeong Palace - located in Jongno, central Seoul - also plans to open the Tongmyeongjeon to visitors. The king and his family used to live in this area of the palace, which is normally closed to the public. You don’t need to wear hanbok or visit with family.

Get your game on

At an open space located right in front of the National Theater of Korea, you can try your hand at a variety of diverse traditional Korean games and activities such as tuho (throwing arrows into a cylindrical container), jegi and neol-ddwigi, a Korean-style seesaw. You will also see eight families who made it to the finals of a competition playing yutnori, a Korean-style game, on a huge board.

How to get there: Dongguk University Station, line No. 3, exit 2

Everland - the country’s largest theme park, located in Yongin, Gyeonggi - will run a special white tiger safari tour to celebrate the Year of the Tiger, which this time around is also dubbed the Year of the White Tiger. Visitors who hop on the safari will get to see live white tigers and learn more about these majestic felines. If you’re looking for something a little less fearsome, check out the parade of waddling penguins clad in hanbok, which runs at 11 a.m., 1:40 and 3:20 p.m. daily over the holiday.

Non-Koreans can also participate in the park’s Folk Game Festival for the first time. After learning some techniques for playing traditional instruments and rules for folk games, participants can compete against each other for prizes. Non-Koreans and those born in the Year of Tiger can receive discounts on admission during the Lunar New Year holiday.

How to get there: Numerous buses serve the area.