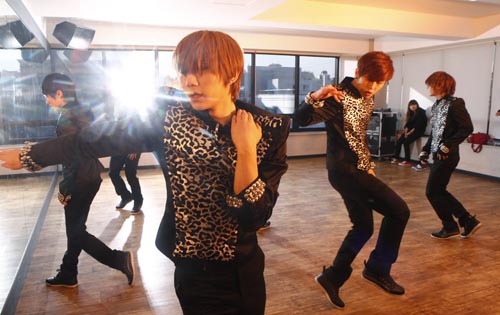 In the foreground, from left to right, Lee Gi-kwang, Jang Hyun-seung, Yong Jun-hyung and Son Dong-woon are four of the six members of the boy band Beast. By Kim Hyun-dong

One frigid day late last month, a group of teenage girls began to gather in front of a building in Cheongdam-dong, southern Seoul, apparently waiting for someone, or something. After a while, a well-dressed boy wearing makeup and surrounded by bodyguards appeared at the entrance, and the girls erupted in excitement. 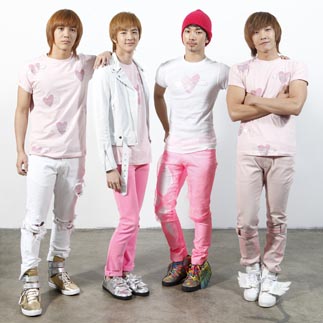 From left to right, Mir, Thunder, G.O. and Joon are four members of MBLAQ. The fifth, Seungho, was unavailable for the photo shoot due to health issues. By Oh Sang-min

They’d been waiting to catch a glimpse of or maybe even chat with the up-and-coming boy band Beast. It’s a relatively common sight in the neighborhood, which is full of practice rooms and boarding houses for Korea’s pop idol groups.

“There are many girls coming every day and waiting to see the boys,” said Park Yong-bok, manager of the boy band, giving the regulars a nod as he passed.

The word “idol” first meant an inanimate object of worship, but it’s evolved to include modern celebrities. On the Korean pop music scene, “idol groups” are bands consisting of boys or girls in their teenage years or early 20s. And in recent years they’ve dominated the industry. 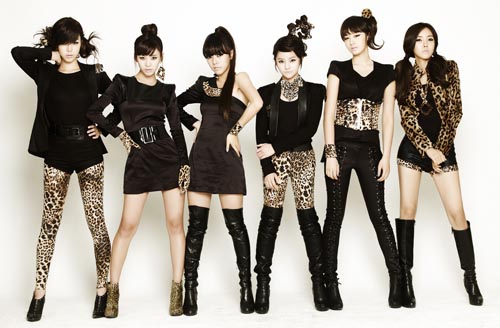 But stars aren’t built in a day. To become a member of one of these bands, young children go through years of grueling training - all without any guarantee of success in the end.

Last month, the Wonder Girls, the girl group whose debut became the first by any Korean musicians to make it onto the U.S. Billboard Hot 100 Singles chart, lost a member to the stress of idol life when Sun-mi announced she was leaving to focus on her studies. The 19-year-old’s decision came during the group’s U.S. tour, which kicked off last year.

“It was such a happy and precious experience for me to be on the tour of 50 U.S. cities and perform on the stage, but I came to wonder, can I go on living like this?” Sun-mi said in a statement later released by the group’s management agency JYP Entertainment.

Sun-mi’s announcement not only jolted fans, but also stirred up controversy about the pressure on idol performers - either yet a trainee aspiring to be an idol star or already such a one - to maintain a schedule some say is too hard for a teenager to bear.

In Korea, entertainment agencies looking to create idols - which they then also manage - maintain well-ordered training programs. Prospective talents in music or acting register with an agency, then, if accepted, undergo four to five years, on average, of training before their debuts. During that process, the company may require the aspiring star to live in a boarding house with colleagues (or rivals), go on a strict diet with regular weight checks and put in more than 10 hours of practice a day.

But the trainees don’t know how long it will take for them to make their debuts - if that day ever arrives - and are often allegedly given little idea of the draining life they’re signing up for when they enter a training program.

Park, the manager of Beast at Cube Entertainment, explained, “When registering as a trainee with our company, the trainee makes an agreement with us that they will comply with a set of rules along with an acknowledgement that we cannot guarantee when they will be able to make their debut as a full-fledged singer.

“No one knows how long it will take for one to end his or her traineeship - it actually depends on themselves.”

“Among the members of [popular idol group] Girls’ Generation, Sooyoung, Hyoyeon and Jessica were trainees at SM Entertainment for about seven years, since they joined us when they were 11 years old,” said Kim Eun-ah, a public relations official for that agency.

Park at Cube Entertainment also discussed the company’s special system that, as he put it, “separates the grain from the chaff.”

“We have an evaluation session at the end of every month. With the company’s officials, trainees and their parents present, the trainees are expected to show off how much they have developed over a month. If one shines particularly brightly at the session, he or she wins an advantage over others to make an earlier debut,” he said.

According to one member of Beast, “When we were trainees, we came to the practice room at 10 a.m. every day and left around at 10 p.m. It was like going to school daily.”

The boys in Beast, which made its debut last October, are age 19 to 21, and they said they spent five to six years on average as trainees before that time. And not all trained at Cube Entertainment. One of the members, Jang Hyun-seung, was initially slated to join the idol group Big Bang, but he withdrew from the group’s agency, YG Entertainment, after being eliminated from the reality TV show - called “Real Docu Big Bang” on MTV Korea - that was used to select the final members.

In fact, these no-holds-barred training regimens - and the hold they give managers over young performers’ careers - have caused numerous scandals over the years. Last year, when actress Jang Ja-yeon committed suicide after allegedly being forced to act as an escort for VIPs at the behest of her manager, it led to an investigation by the Fair Trade Commission, which found last July that most entertainment contracts, including those for idol groups, infringe on performer privacy and limit their ability to change agencies.

One of the most notorious scandals is a legal battle between the members of TVXQ, Korea's popular idol group that commands popularity across Asia, and their management agency. In July last year, three of the band’s five members - Xiah Jun-su, Micky Yoo-chun and Hero Jae-joong - took legal action against SM Entertainment, claiming that their 13-year contract was akin to a lifelong agreement and is therefore unfair. The group has since come close to disbanding, with the other two members siding with the agency, and the situation remains unresolved.

On the other hand, many idol group members see the merit in sticking with the traineeship. No matter how hard the training got, Beast’s performers said, it was okay with them because they were so eager to become singers. What made that period difficult was the psychological pressure and the teenage life that they were forced to give up, rather than the intensive training itself.

Beast member Yong Jun-hyung, 21, likened life as a trainee to “a painful addiction.”

“You cannot get out of it either because you are so much in love and addicted to it, or because you know there can be no turning back once you’ve crossed the line,” Yong said. “The cost is too high [if you give up halfway] because there would be so many things you’ve given up to do this, for example, your normal school life and quality time that could be spent with your beloved family and friends.”

Yong concluded with a warning. “I advise anybody who plans to do this to consider whether you are really committed, because if you’re not, it will be very difficult to stick it out as a trainee.”

One of his comrades in Beast, the 20-year-old Lee Gi-kwang, added, “I’ve seen some friends who entered this world, being tempted by the glamour and perks that celebrities enjoy and without really knowing what their life would be, and ended up leaving badly hurt.

“When you see your trainee peers make their debuts ahead of you, it can also hurt. So you need to be strong to establish yourself in this world.”

And that long-awaited professional debut, though it may bring pride in one’s accomplishments, more cash and, with luck, adoring fans, doesn’t mean the end of the hectic, agency-directed schedule or the fierce competition.

According to Cube Entertainment, the band Beast, which is still making a name for itself, performs for television music programs about three times a week in addition to appearing on radio programs, doing interviews with local media and separating for individual gigs - Gi-kwang plays a character on the popular TV sitcom “High Kick,” for example. In between, members are expected to go to the practice room daily for vocal and dance training.

“There is no such thing as a daily routine for us. We get up at daybreak when our schedule begins early in the morning, but sometimes we start the day after the sun goes down if we had an all-night schedule the night before,” Jun-hyung said.

“What makes us keep going despite the killer schedule is all the time and effort we have put in to get here,” Gi-kwang said. “Considering what we have been through, we cannot simply give it away.”

Sleep deprivation is another concern. The members of the popular boy band MBLAQ said in a recent interview that the hardest part of their tight schedule is the chronic lack of sleep. The five-member boy group came into the spotlight even before its official debut in October last year because it was trained by the Korean pop star Rain.

The members of the six-girl group T-ara, which debuted half a year ago and becomes increasingly popular with hit songs like “Bo Peep Bo Peep” and various activities including an online shopping mall project dubbed “T-ara dot-com,” also spoke candidly of their difficulties in dealing with want of sleep from a tight schedule during a recent interview.

Despite all the problems, however, many idols see themselves continuing in the field even 10 years from today.

“I imagine myself still living as a singer-actor who is also engaged in businesses related to fashion and beauty,” T-ara member Soyeon, 24, said.

Eunjung, 23, another T-ara girl and a former child actor, agreed. “I think I will keep on with my acting career as I’m also interested in producing as well,” she said.

As indicated by the girls’ answers, it’s not uncommon for today’s teen idols to become tomorrow’s movie and TV stars, eventually developing into the producers who pick out the stars of the future.

The burgeoning field of musical theater is another popular choice, with several former idol stars making their way in that sphere. Ock Ju-hyun from the now-disbanded girl group Fin.K.L has appeared in “Aida,” “Cats” and “Chicago,” while Choi Sung-hee, also known as Bada, from the girl band S.E.S. has performed in “Notre Dame de Paris.” Most recently, Xiah Jun-su from TVXQ and Jessica from Girls’ Generation landed roles in musicals: “Mozart!” and “Legally Blonde,” respectively.