A new home for golf’s greats

A new home for golf’s greats 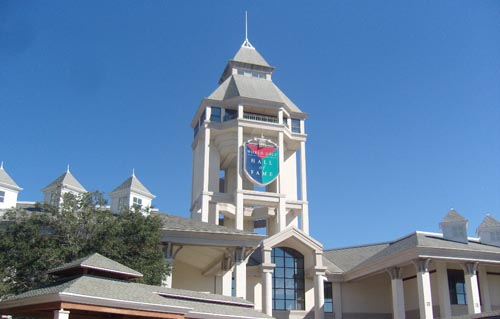 The World Golf Village in St. Augustine, Florida, is home to the Hall of Fame, pictured, as well as two golf courses and a golf academy.

Nestled between oak woods, a lime-green sign reads “Fairway.” Further on, past a clubhouse and a small lake, there’s a building with a pointed roof. This is the World Golf Hall of Fame, in the World Golf Village in St. Augustine, Florida.

The greatest players in the sport are honored here, with over 2,000 pieces of personal memorabilia along with videos and photos. The village is supported by a consortium of 26 golf organizations from all over the world, reflected in a row of flags at the entrance, including a Korean one raised by pro Pak Se-ri. 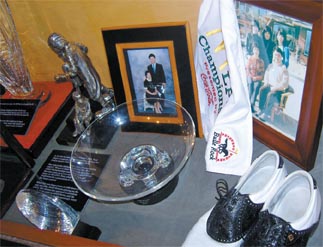 Pak Se-ri’s locker at the hall of fame includes commemorative photographs and her trophy from the 1998 U.S. Women’s Open.

Every hall of famer’s name is listed in the lobby in alphabetical order, starting with Amy Alcott and ending with Babe Zaharias. About 25 percent of the 130 inductees are female, since this is one of the rare sports halls of fame that serves both men and women. Pak became the youngest woman to be inducted at age 29 in 2007, with 24 LPGA victories and five major championships under her belt.

However, after her induction, whether golfers belong in the hall of fame has become an issue. “We’re trying to change the criteria for the LPGA Point System,” said a spokesperson at the Hall of Fame. “An athlete would have to be an active LPGA Tour member for 10 years in this category, but we’re trying to change it to the same as the men’s PGA Tour Ballot, which requires the inductee to be a minimum of 40 years old.” 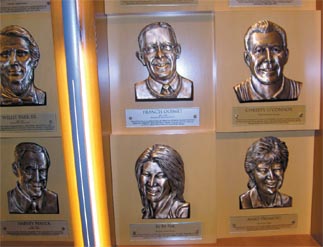 The faces of golf’s greats line the Wall of Fame.

The inductees in the hall of fame are golf legends. There’s Massachusetts-born Francis Ouimet, whose plaque is right above Pak’s. He won the U.S. Open at The Country Club as an amateur at the age of 20 in 1913. Ouimet is seen as a revolutionary who changed golf from a stuffy and exclusive game for the old and rich into a popular sport. In 1951, he became the first American to captain the Royal and Ancient Golf Club. Below Pak’s plaque is Arnold Palmer’s, to the right is Curtis Strange and to the left is course architect Robert Trent Jones, Sr.

The World Golf Hall of Fame was originally located in Pinehurst, North Carolina, where it opened in 1974 with a class of 13 members, but the PGA took over management in 1983. The new site in St. Augustine opened in 1998, and the LPGA Tour Hall of Fame in Georgia merged with it the same year.

Also in the hall of fame are famous golf aficionados such as Bob Hope, whose plaque reads, “Not a golf champion, but a great champion of golf.”

Hope played with the top professionals, caddies, celebrities, generals and sometimes even presidents such as Gerald Ford, George H. W. Bush and Bill Clinton. The exhibition “Bob Hope: Shanks for the Memory” displays the largest collection of his golf memorabilia.

Visitors can follow in the footsteps of Bobby Jones and Ben Hogan on the “Wall of Fame,” where plaques of all the inductees’ embossed faces hang along the wall.

One of the highlights at the Hall of Fame is the members’ locker room. Golf clubs and trophies adorn every corner. In Payne Stewart’s locker are a golf club, his trademark flat cap and his harmonica. Tom Kite’s locker showcases his golf bag and clubs he used during the 1992 U.S. Open. In the locker of the first African-American to play in the PGA and to be inducted into the Hall of Fame, Charlie Sifford, sits his PGA membership card, a winning scorecard and his favorite brand of cigars. The most successful amateur golfer in Canadian history, Marlene Stewart Streit, donated her knitting needles and the clubs she bought with the money she saved up working as a caddy.

In Pak’s locker is a photo of her holding up the trophy she won at the 1998 U.S. Women’s Open. The words “Se-ri Pak will always be remembered as one of golf’s most important pioneers” are written on the wall. Her win at the 1998 U.S. Women’s Open inspired the wave of Koreans who have since ranked at the top of the LPGA. There is also an explanation as to why the romanization of Pak’s name is Pak instead of Pak. Apparently, when she was getting her passport, she forgot to write the “r,” but realized this made her name look unique.