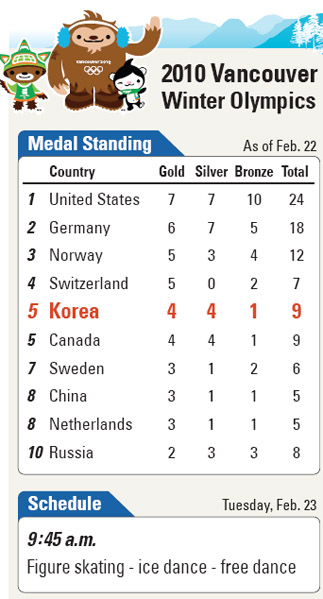 WHISTLER, British Columbia - German master Andre Lange powered smoothly to victory in the Olympic two-man bobsleigh on Sunday to continue his total domination of the sport.

The 36-year-old Thuringia Express, who will park his sled for good after the four-man race, has now won four Olympic golds, beating the three of fellow German Meinhard Nehmer.

“If you had told me when I started 17 years ago that I would win four gold medals I would have said you were stupid,” Lange, who switched to bobsleigh in 1993 after failing to make the grade in luge, told reporters.

“There was a lot of pressure because we are also the Olympic titleholders. Germany had high expectations that we would win, and now of course we have.”

Lange was the midway leader after Saturday’s opening two runs - but not by much.

Just 0.11 seconds separated him from Germany II driver Thomas Florschuetz, so there was zero margin for error. But on Sunday, as he has been for most of his career, Lange was sheer perfection, driving like his sled was on rails.

With 116-kilo (255.7-pound) former sprinter Kevin Kuske, his trusty sidekick for three of his four golds, providing the legs at the start, Lange steered his gleaming blue machine imperiously through Whistler’s 16 whiplash corners, taking victory with a combined time of three minutes 26.65 seconds.

During his four virtually identical slides Lange barely scraped a wall, reducing a track described as dangerous earlier in the Games and which produced several high-speed flips on Saturday, into a routine Sunday drive in the country. After rounding Thunderbird corner and crossing the finish line a joyful Lange thumped his fists down hard on the front of his speeding sled.

Florschuetz, to his credit, ended just 0.22 seconds slower, while Alexsandr Zubkov steered Russia to its first medal in the two-man discipline since 1988.

“We were just two tenths behind Lange in four runs,” Florschuetz said. “We will follow his model for success and try and emulate the best.”

Lange, nicknamed the “Little Teddy Bear” by his team for his gentle nature away from the track, said he would delay the party for a while because there is still unfinished business and more record books to rewrite. He will become the first man to win three consecutive golds in the four-man if he triumphs next Saturday.

“We will celebrate a little bit, but the mission isn’t over yet,” Lange said.Reuters