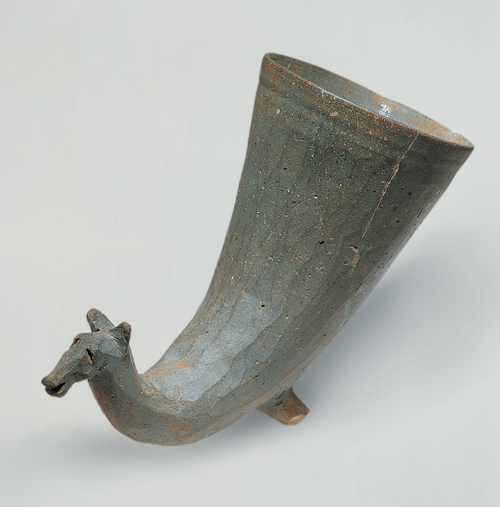 This artifact made of an animal horn originates from the ancient tradition of drinking from the horns of cows or rhinoceroses during the Gaya period in the fifth century. It was excavated from a tomb in Dongnae area of Busan.

In the initial period of the Three Kingdoms, real horns were used to produce this kind of cup, but the materials were gradually diversified to include ivory, metal and jade. Horn-shaped cups made of earthenware, wooden lacquer and gilt bronze were widely adopted by nomads in the northern part of the Korean Peninsula. Records from the ancient history book “Samguk Yusa,” meaning “Memorabilia of the Three Kingdoms,” show that horn-shaped cups were popular in Silla, one of three kingdoms.

This horse-shaped horn cup is unique in that the head of a horse is carved at the far end of the horn. Similar cups were discovered in China and Sassanid Persia during the same period.

*The photos and texts for Treasure Trove are provided by National Museum of Korea. For more information, you can call 02-2077-9000 or visit www.museum.go.kr