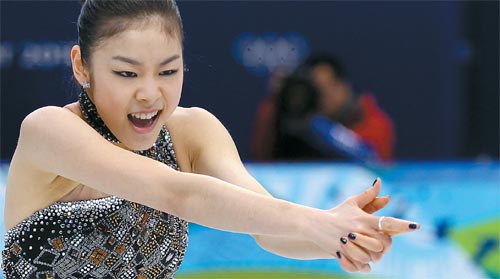 Kim Yu-na points and shoots in her Bond girl outfit to caps off the short program at the Pacific Coliseum in Vancouver yesterday. [YONHAP]

Kim Yu-na lived up to the hype surrounding her yesterday as she set a new world record in the women’s figure skating short program with a score of 78.50. Elsewhere on the ice, Lee Seung-hoon powered to a surprise victory in the men’s 10,000-meter speed skating event.

World champion Kim entered the figure skating contest at Vancouver’s Pacific Coliseum as the heavy favorite and under a world of pressure. She more than delivered on expectations, breaking her own world record of 76.28 points in the short program, which she had set at Skate America 2009 last November in Lake Placid, New York.

“I had been looking forward to the Olympics,” said Kim. “I had prepared thoroughly and so I was not nervous. I am happy to have performed well. I was expecting the top score if I managed to go through my routine without any mistakes. Having said that, I did not focus on the scoring aspect of the competition.”

Skating 23rd out of a field of 30, Kim took to the ice just after her rival Mao Asada of Japan. Asada landed her triple axel jumps in smooth fashion and posted her season best score of 73.78. With the pressure of following the Japanese skater’s impressive run, Kim responded with a great performance of her own in which she executed her signature triple lutz and triple toe loop combination flawlessly.

“It would be nice if I could ignore Asada’s routine but that’s not possible,” Kim said. “But it did not have an effect on my performance today.”

With the free skating portion of the women’s figure skating competition to be held on Friday, Kim leads the field with Asada trailing in second and Joannie Rochette of Canada in third. Korea’s other competitor, Kwak Min-jung, scored 53.16 for 16th overall and qualified for Friday’s competition.

Skating earlier in the day at the Richmond Olympic Oval, Lee Seung-hoon took the men’s 10,000-meter race in 12 minutes 58.55 seconds, winning the gold medal and setting a new Olympic record. Sven Kramer of the Netherlands was the strong favorite to win the race and had finished over four full seconds ahead of Lee with the time of 12 minutes 54.50 seconds. He was disqualified, however, for failing to switch lanes during the 17th lap.

“It’s all a miracle,” said the bewildered Lee in a post-race interview. “It’s a miracle that I set an Olympic record but I can’t believe that Kramer was disqualified.”

The gold is the first for an Asian skater in a long-distance speed skating event, and comes on the heels of Lee’s silver medal-winning performance in the 5,000-meter race on Feb. 14.

What makes the win all the more shocking is that Lee is a newcomer to the long-track race. Having skated in short-track events throughout his career, Lee failed to make the final cut at the short-track national team tryouts in April of last year. After making the switch to long track last July, he competed in the 10,000-meter event twice prior to the Vancouver Winter Games.

Skating without any pressure, Lee posted an eye-popping time in the event, finishing a lap ahead of Arjen van de Kieft, with whom he was paired at the start. In a race consisting of 25 laps around the 400-meter oval rink, it is rare for a skater to push for a final spurt in the latter stages. However, Lee’s 30.29 seconds in his last lap was the fastest time of his race.

“European skaters have a physical advantage. It’s just not easy to keep up with their long strides,” explained Lee. “Hence, it becomes imperative for us to maintain a low posture, but this takes a lot of strength. We worked tirelessly on speed and endurance training throughout last summer.”