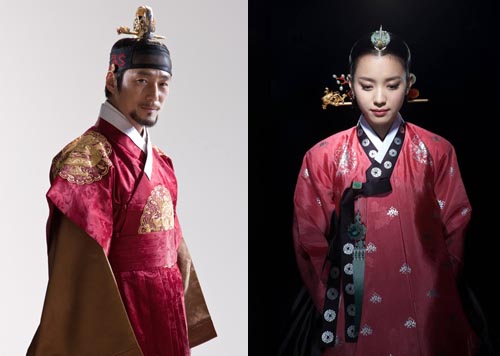 The month of March may bring a dilemma to TV viewers deciding which channel to watch, as all three major television networks will start new drama series.

For hanbok-happy watchers, MBC offers the period drama “Dong Yi,” while KBS features a present-day show about social climbers, “Birth of the Rich.”

But in the most significant shift this season, both SBS and MBC will offer dramas with characters who are gay - or at least, in one case, pretending to be.

The historical drama “Dong Yi” is drawing attention for its producer Lee Byung-hoon, who had a hand in other hit series including the hugely successful “Daejanggeum.”

Dong Yi is set in the reign of King Sukjong (played by Ji Jin-hee) in the Joseon Dynasty. It centers on a water maid, Sook Bin (Han Hyo-joo), who becomes the king’s concubine and bears a son who will become Yeongjo, a Joseon king.

Lee, the producer, is presenting a different take on this well-known story. “Sook Bin’s side of the story is significant because she was the one who raised one of the most honorable kings, Yeongjo. Although he was common by birth, he became a great king thanks to his mother’s teachings,” he said in an interview with Interpark Book&. The show will air Mondays and Tuesdays at 9:55 p.m. starting next month.

KBS’s Birth of the Rich will run on the same days. According to the drama’s Web site, the show intends to “get rid of prejudice against the rich,” claiming to reveal more than 80 different ways to hit the jackpot.

Lee Bo-young will play an heiress who stands to inherit $400 million, while Ji Hyun-woo’s character is a young man who studies how to reach the upper echelons of wealth. Birth of the Rich premieres on Monday.

Viewers will no doubt compare MBC’s “Personal Preference” with SBS’s “Life is Beautiful” for their examination of gay lives. The former, based on a novel by Lee Sae-in, will start airing Wednesdays and Thursdays at the end of March. Actress Son Ye-jin, who stole the spotlight in “My Wife Got Married,” makes her comeback as a woman who yearns for her gay best friend.

Lee Min-ho fills that role after the success of “Boys Over Flowers.” The problem is, he’s not actually gay - he’s lying so he can be her roommate.

The 50 episodes of Life is Beautiful, written by hitmaker Kim Soo-hyun, begin March 13. It follows a large family that includes a gay couple played by Song Chang-eui and Lee Sang-yoon.