In short track, a painful replay

In short track, a painful replay


An unexpected turn of events immediately following the end of the women’s short-track relay race had Korean coaches and fans alike rehashing painful memories of 2002 when male short-track speed skater Kim Dong-sung was disqualified despite crossing the finish line first in the 1,500-meter race at the 2002 Salt Lake City Olympics.

While Apolo Anton Ohno was the target of Korean fans’ frustrations eight years ago, many this time vented their anger at James Hewish, the chief referee who disqualified both Kim Min-jung yesterday and Kim Dong-sung in 2002.

“Hewish, what is with the ruling? It was the Chinese skater who made contact first,” wrote one user on Naver, a popular Korean Web portal.

“If they don’t return the gold medal, we should boycott the 2014 Winter Games [in Sochi, Russia]. Let’s stay away from the Olympics which is sorely lacking in sportsmanship,” said another.

Korea’s head coach was livid about the disqualification and was seen trying in vain to argue his case against Hewish. Under International Olympic Committee rules, Korea cannot submit a formal request to overturn the officiating crew’s final ruling.

“I was angry with the referee. He just ignored me and turned away. It was out of my control,” head coach Choi Kwang-bok told the press.

“The officials ruled impeding on the basis that Kim and Sun came in contact as they got ready to enter a corner. The assistant who was observing that particular corner was a Chinese official and the main referee is from Australia, the same one who disqualified Kim Dong-sung against Ohno.

“I don’t understand why they did that. There was no body contact today.”

As Choi fumed, the Chinese women’s team celebrated their world record-setting triumph over their rivals and refused to step into the controversy.

“I was not surprised by the disqualification because collisions happen all the time in short track,” stated skater Wang Meng to the press.

Sun said, “Kim was trying to overtake me and she couldn’t get through so I guess that’s how the collision happened. I think the referee’s decision is fair.”

Contributing to the controversy is the International Skating Union’s officiating system, which leaves room for questionable calls. 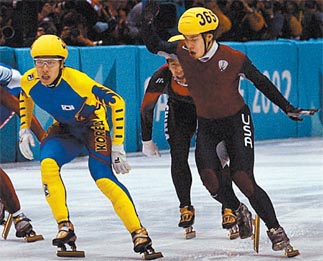 In a sport in which a group of skaters travel an average of 45 kilometers (28 miles) per hour around oval tracks that measure 111.12-meters - or about one-fourth the size of a speed skating track - contact is unavoidable. And the slightest contact can cause skaters to lose balance and fall behind in a race.

The ISU retains the right to disqualify skaters in order to encourage fair play and good sportsmanship. The ISU rule book disqualifies skaters for deliberately blocking, charging, impeding or pushing an opponent.

Other infractions include purposely kicking out a skate, slowing down unnecessarily and conspiring with teammates to affect the outcome of a race.

While the rules are clear, the decisions on who actually breaks them are up to the sole discretion of the chief official. Four assistant officials can offer their take on an incident, but only one person has the final say.

Because some of the contacts are slight, rulings can vary depending on the opinion of a referee. The fact that Hewish and his crew took a significant amount of time to review the race before coming to their decision indicates that there were disagreements within the group.

“I think the chief official and his assistants went back and forth with the decision,” explained Choi. “Short-track is an event in which a lot of unpredictable events can occur. The ruling could have gone either way but we ended up getting disqualified.”

One Korean Skating Union official said it is difficult to see clearly whether Kim intentionally impeded on Sun and opinions can vary depending on the angle of the video replay.