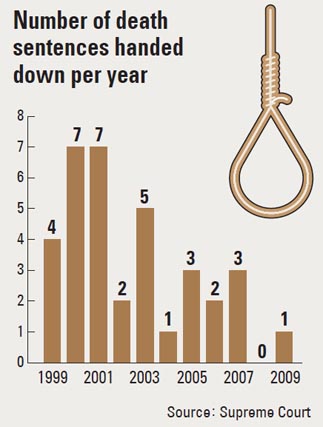 For the second time since 1996, the Constitutional Court of Korea yesterday ruled that capital punishment is constitutional.

This time, five of the nine Constitutional Court Justices formed the majority. In November 1996, seven of the nine justices ruled in favor of capital punishment.

The Constitutional Court considered the issue after the Gwangju High Court asked for an opinion involving a 72-year-old convicted killer. The man, named Oh, had appealed to the Gwangju court after being sentenced to death for slaying four travelers in Boseong, South Jeolla, in 2007.

“The human life is part of basic human rights,” the court said. “However, in order to protect the lives of people or equally important public interests, stripping a person of the right to life in such exceptional situations can’t be considered an infringement on fundamental basic rights ... Capital punishment is a type of punishment allowed by the Constitution and thus it can’t be considered to exceed constitutional limits. It also doesn’t run counter to the constitutional clause on human dignity.”

The Constitutional Court’s Chief Justice Lee Kang-kook was among the five who ruled in favor of the death penalty. He was joined by Lee Kong-hyun, Lee Dong-heub, Min Hyeong-ki and Song Doo-hwan.

Lee Kang-kook said denying capital punishment in the name of the right to life runs counter to a proper interpretation of the Constitution. Lee Kong-hyun and Lee Dong-heub said that since only the most brutal of criminals are subject to the death penalty, the punishment doesn’t violate human dignity. Min and Song called for improvement of the system.

“The punishment itself isn’t the problem, but abusing it is,” the two justices said. “We need to review the penalty clauses to reduce the number of crimes subject to the death penalty, and to gather public opinion to improve the situation.”

As of yesterday, there were 59 death row inmates in the country. One of those has been in prison since 1992, while 36 have been locked up for at least 11 years.

According to the Justice Ministry, 920 people have been executed since the Korean government’s foundation in 1948. The last execution came in December 1997, at the tail end of the Kim Young-sam administration. Twenty-three convicts were executed then. It had been customary for a Korean administration to carry out multiple executions toward the end of its term.

Since President Kim Dae-jung took office just days later, there has been a moratorium on execution. Kim himself was sentenced to death in 1980 before being pardoned.

Since Korea hasn’t executed anyone for more than 10 years, Amnesty International labels the country as “an abolitionist in practice.” There are 34 other nations in that category.

The decision yesterday was greeted with mixed reactions from different activists. Jeon Hee-kyung of Citizens United for Better Society said until the crime rate takes a big drop, it would be “premature to discuss abolishing the death penalty.”

Human rights activists and religious groups have long called for abolition of the death penalty. Amnesty International Korea issued a statement yesterday saying the Constitutional Court’s ruling doesn’t justify capital punishment and called for the National Assembly to work on abolishing it altogether.