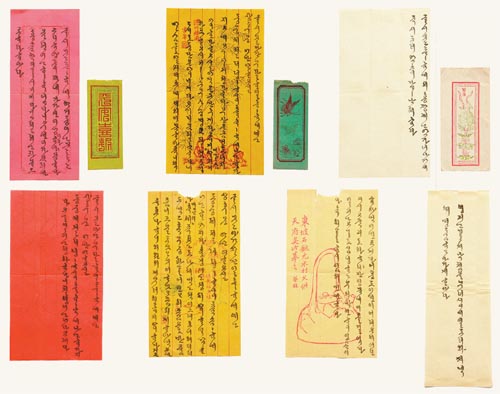 A packet of eight letters written by Empress Myeongseong before she was assassinated and their original envelopes, above, and an 18K gold pocket watch once owned by Emperor Sunjong, the last monarch of the Joseon Dynasty (1392-1910), are just some of the items on view at the Art Tower in Sinsa-dong southern Seoul before they are put up for auction next Wednesday. Provided by K Auction


For fine art collectors, major art auctions are a must. For noncollectors, auction previews are a good chance to learn about art history and the contemporary art scene. Previews also provide visitors with a way to see something of the private lives of historical figures who lived in turbulent periods.

All of that is possible at the upcoming quarterly auction organized by K Auction scheduled for next Wednesday and at the preview exhibition that starts today at the Art Tower in Sinsa-dong, southern Seoul. 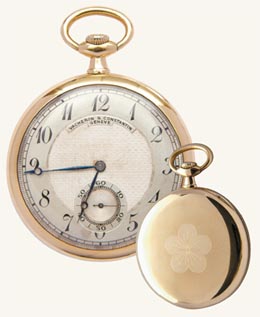 One item that will be put up for auction is a pocket watch once owned by Emperor Sunjong, the last monarch of the Joseon Dynasty (1392-1910), who saw the nation colonized by Japan in 1910.

The watch, produced by the Swiss watchmaker Vacheron Constantin, has an oyat blossom engraved on its back. The oyat is a kind of plum and was the emblem of the Joseon royal family as well as the short-lived Korean Empire (1897-1910).

“It is said that Emperor Sunjong loved watches and clocks,” Kim Soon-ung, CEO of K Auction said. According to the auction house, Sunjong’s residence, Changdeok Palace, was filled with various clocks and he enjoyed hearing the different sounds of the clocks chiming every hour.

Another item to be auctioned off is a packet of eight letters written by Sunjong’s ill-fated mother, Empress Myeongseong, and the six envelopes in which she sealed them. Myeongseong was active in the nation’s diplomatic affairs and was brutally murdered by assassins from Japan, who concluded that she was one of the biggest obstacles to its colonization of Korea.

The letters were sent by the empress to her cousin Min Yeong-so and cover various topics ranging from the health of her husband Emperor Gojong and her son Sunjong, concerns about the health of a child in Min’s family, the weather and politics, K Auction said.

The paper on which the letters were printed is dyed and of the highest quality, and it would not have been used by ordinary people, the auction house added. The value of the letters and their envelopes is estimated to be between 50 million won and 80 million won. 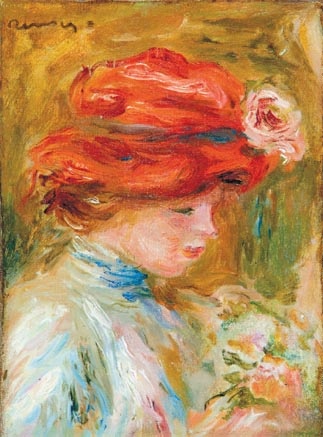 Renoir’s oil painting “La Jeune Femme au Chapeau Rouge” is among the items on offer at a quarterly auction organized by K Auction scheduled for next week.

Items such as these that once belonged to the ill-fated royal family of the Joseon Dynasty are attracting greater public attention because this year is the 100th anniversary of Japan’s annexation of Korea.

For example, one of the best selling books in the country these days is a historical novel about Princess Deokhye, the last Joseon Dynasty princess. The novel, “Princess Deokhye,” by Kwon Bi-young, tells of the miserable life of the princess, who was beloved by her father, Emperor Gojong, but was taken to Japan by the colonial government after her father’s sudden and suspicious death.

While in Japan, the princess was forced to marry Count So Takeyuki, a powerless Japanese local aristocrat, and she suffered serious mental instability brought on by her hardships. Even after the liberation of Korea in 1945, she remained in a Japanese mental hospital due to the indifference of Koreans to her plight. She finally returned to Korea in 1962 but continued to suffer from mental illness and the disregard of the public.

The novel topped the Korea Publishers’ Society’s best-seller list for the fourth straight week as of the third week of February. The list is based on the sales data for 11 major online and off-line book retailers.

In another example of growing interest in Joseon era artifacts, last week, the Hooam Future Institute, a cultural civic group, unveiled to the public a photo album containing rare photographs of the royal family. The photo album is assumed to have been made in the 1920s and bears the golden emblem of the oyat flower. It was produced by the then Ministry of Home Affairs.

In mid-February, the National Palace Museum of Korea unveiled to the press about 700 articles left by Crown Prince Euimin, or King Yeongchin, a younger brother of Emperor Sunjong, and his family. Among the items are a diary written by Euimin’s wife, Crown Princess Bangja, letters and photos.

Paintings by renowned Korean modern artists will be also put up for auction. Among them are the oil painting “Women” by Park Soo-keun and the abstract painting “Sounds of an Early Spring” by Kim Hwan-ki.

Park and Kim are the most favored artists among Korean collectors. K-Auction estimates the value of the Park painting, with its unique thick matiere, to be between 750 and 900 million won. Kim’s work is estimated to be worth between 630 million won to 800 million won.