Two titans come together to give a classic a titillating twist

Two titans come together to give a classic a titillating twist 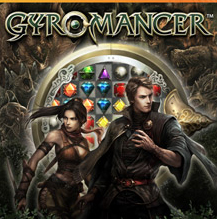 I wanted to review “Heavy Rain,” the new PlayStation 3 exclusive “interactive drama” from the maker of “Indigo Prophecy,” this week, but when I sat down with it Monday I found my console inoperative, and a quick Google search revealed I wasn’t the only one. The entire world - well, the parts of the world that could afford to spend wads of cash on an original “fat” PS3 - was experiencing problems.

It wasn’t a virus or a faulty update; it was affecting even devices not plugged into the Internet. Instead, it was a problem with how the PS3 processes leap years since March 1 would, in a leap year, actually be Feb. 29. In other words, Sony had messed up the calendar.

Perhaps they’re not quite on the same scale, but it certainly reminded me of the NASA imperial-metric confusion that led to the loss of a Mars orbiter in 1999.

So instead of wading into an atmospheric noir murder mystery, I downloaded “Gyromancer,” a frivolous little puzzler-RPG that started off as a joke made by casual developer Pop Cap’s co-founder Jason Kapalka at a meeting with Square Enix - about “Final Fantasy: Bejeweled” - that to his surprise, the Japanese game maker took seriously.

It’s one of the unlikeliest collaborations ever: the flagbearer for hard-core, epic Japanese role-playing games - the 40-hour behemoths that involve more statistical analysis and inventory management than actual play - with the leader of the casual gaming revolution.

It’s even more shocking that it works. The bizarre final result plays like a mix between Bejeweled, an early Final Fantasy game and Pokemon.

The story is typical Squeenix pablum, with vague characterizations, a terrible lack of exposition and dialogue that subscribes to the school of fantasy-speak that likes to throw the word “demesne” around and believes that the more archaic and confusing it is, the more sophisticated it’ll sound. You play an immortal (who looks 22) with the power to summon monsters, whom the king sends into the magical Aldemona Wood to seek out and destroy a rebel group called Temperance, though not once was I subjected to a lecture on how alcohol destroys families. Maybe they’re saving the USB breathalyzer for the sequel - since Temperance is the enemy, perhaps a higher BAC will unlock new powers a la Jackie Chan’s Drunken Master series?

In the forest, you summon your own monsters to battle native beasts and enemies alike. The mechanics are lifted wholesale from “Bejeweled: Twist” - you may rotate four jewels clockwise, endeavoring to make rows or columns of three or more of the same color. Onto that addictive foundation, Square Enix was able to add special combinations and attacks (a few for each summoned monster) and a few surprises and variations. My favorite part of the game was the “puzzle stones” that required you to set up long cascades of matched jewels. These optional side quests give the game a great deal of replay value.

The difficulty does curve up nicely in the beginning, but toward the end, if you keep your beast roster updated and level up with some of the side quests, the battles do become disappointingly easy.

But Gyromancer can be considered a successful experiment in combining one of gaming’s most successful story and art formulas with casual arcade-style gameplay. I certainly enjoyed solving the unique puzzles presented in Gyromancer more than just clicking on an attack and watching my cat-person dance around in front of the enemy until its hit points float away.

In other gaming news, Valve, the maker of “Portal,” released an in-game update this week that led to an old-fashioned dial-up bulletin board, where many text files and pieces of ASCII art appear referencing the version number “3.11.” It just so happens that Valve’s head, Gabe Newell, will be accepting an award and, presumably, giving a speech on March 11, in which, it seems, he may announce a new Portal game.

So mark your calendars. Just make sure you have the right year.