A movie without its muchness

A movie without its muchness 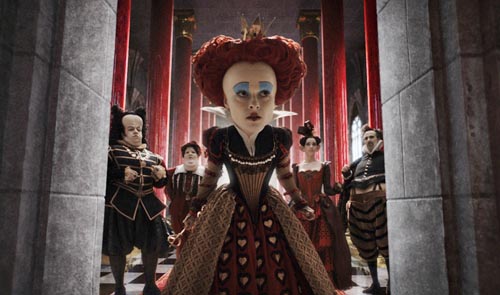 Helena Bonham Carter as the Red Queen in “Alice in Wonderland” directed by Tim Burton. Provided by Disney Entertainment

Watching Alice fall down the rabbit hole that leads to Wonderland in dynamic 3-D is certainly a new, wonderful experience. Fans of “Alice’s Adventures in Wonderland” will recognize the plot but will still be thrilled to see their favorite characters from the original novel - irritating but charming creatures such as the Cheshire Cat - appear before their eyes in vivid 3-D. The movie “Alice in Wonderland” is never disappointing in this respect.

But for anyone expecting a real dose of the “muchness” they felt from the novel that invented that whimsical word, the thrills gradually decrease as the movie goes on.

Eventually, the movie turns into a typical fantasy flick in which the hero evolves through battles against an evil tyrant. It is not a bad idea for the grown-up Alice to summon the courage to fight off the social restraints placed on women in the Victorian era through her scuffles with the tyrannical Red Queen and the Jabberwocky monster in Wonderland. In fact, when I was young, I always wondered why children’s books featured brave and independent young girls but never women.

But the problem is that the theme and plot of the film do not blend well with the original novel’s primary charm - playful madness. The “Jabberwocky” poem full of nonsense verses in the original novel is recited in the movie by the Mad Hatter as if it were a saga or a piece of prophetic writing. That does not compel any laughs at the irony of the situation because the Mad Hatter, played by Johnny Depp, is so serious and gloomy. He asks Alice where her muchness is, but instead I would have liked the chance to ask him where he’s left his madness. For me, the Depp who donned the silk hat to play Willy Wonka in “Charlie and the Chocolate Factory” (2005) looked much more like the Mad Hatter of the novel.

In fact, I think most of the characters in Burton’s Wonderland lack some element of madness. Although the movie emphasizes madness, with the line “All the best people are mad” appearing twice, it is a superficial kind of madness akin to imaginative power, courage and the like. Mostly it sounds like a line in a speech a Korean CEO would give on creativity.

In the novel, the madness of the mad tears at the members of the tea party. The Cheshire Cat, the Duchess (who is notably absent from the movie and sorely missed) and others display both the characters’ irritating and charming sides. It is pure madness.

That’s why the book was so warmly received by Victorian-era children who had been spending their time yawning over books full of morals. The movie emphasizes the lessons of our day - “Be imaginative!” - but movies that get preachy like that can sure be boring.

One of the few characters that made an impression strong enough to relieve us of this drudgery was the Red Queen, played by Helena Bonham Carter. (Actually the character is an amalgam of the Queen of Hearts from the original novel and the Red Queen in the sequel “Through the Looking Glass.”)

The Red Queen is really sadistic, using live animals as furniture in a way that would have made the Marquis de Sade proud. This provides the movie’s funniest and most grotesque moments. However, the queen is also the most miserable character in the film, suffering from an obsession with her appearance and an unrequited longing for love. Just as with the sad antagonists in other Burton movies such as “Batman Returns,” she is the figure who best shows off the director’s style. Unfortunately, however, Burton did not give the queen the depth he bestowed upon those other characters, and that is regrettable.

The combination of Burton and Wonderland does not provide as much of what I had expected from either. But it’s not a disaster. It’s just much more like another bland fantasy film than I would have imagined.