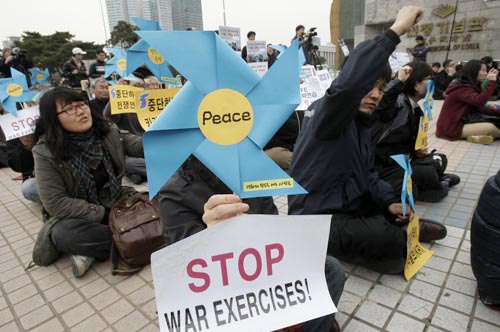 South Korean protesters shout slogans during a rally, protesting against the annual joint military exercises, dubbed Key Resolve and Foal Eagle, between the United States and South Korea, near Defense Ministry in Seoul Saturday. North Korea threatened a “powerful” attack if the U.S. and South Korea proceed with joint military drills next week, warning Thursday that it could even resort to nuclear means. [AP/YONHAP]


South Korea and the United States are set to begin today their annual joint military exercises, Key Resolve/Foal Eagle, but their focus will be as much on reaction by North Korea as on actual drills.

From today until March 18, the Key Resolve exercise will aim to increase efficiency of U.S. reinforcements that would defend South Korea in emergencies. The U.S. forces in South Korea will send about 10,000 troops and they will be joined by 8,000 reinforcement personnel.

Last year, about 26,000 American soldiers took part in Key Resolve. Kim Yong-kyu, spokesman for the Combined Forces Command in Seoul, explained that an aircraft carrier that came last year will not make the trip this year.

North Korea has long denounced the joint exercises, calling them a U.S.-South Korea rehearsal for invasion. In February and once again yesterday, Pyongyang threatened to take military action if the South and the United States went ahead with their drills and said it would further bolster its nuclear deterrence.

This year’s exercises come as South Korea and other negotiators are trying to bring the North back to the six-party nuclear talks table. The Combined Forces Command in February informed the North of the exercise dates and the defensive nature of their routines.

While keeping out the U.S. aircraft carrier may appear to be designed not to further provoke North Korea, the combined command has said scaling down the exercise had to do with operational considerations.

Last year, the North cut off inter-Korean military communications with the South on the day the joint drills began, stranding dozens of South Koreans north of the border because they couldn’t receive the necessary authorization from the North through the disconnected channel. The lines remained severed for the duration of the exercises.

One government source predicted that the North won’t take such a drastic measure and risk upsetting the South and the United States this year, as diplomatic efforts continue to reopen the six-party talks.

Chinese Foreign Minister Yang Jiechi yesterday urged all sides to keep trying to restart talks with the North. Wu Dawei, China’s special representative on Korean peninsula affairs, also said the six-party talks mechanism “still has vitality” and the involved parties will try to restore the dialogue in the first half of this year. China is the chair country of the discussions.