The battle of cars, cows and wheat

The battle of cars, cows and wheat 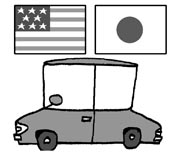 There are two ways of making automobiles in the United States. They are either manufactured in Detroit or cultivated in Iowa. But seeing as Iowa doesn’t have any car factories, how does that work? First, wheat is grown in Iowa, then it’s loaded onto a ship and shipped across the Pacific. A couple of months later, the ship returns laden with Toyota automobiles.

That’s why, according to American economist David Freedman, workers at auto factories in Detroit and farmers in Iowa are in direct competition. He says that if the government raises protective trade barriers to benefit Detroit, farmers in Iowa will feel the pain. It is like emptying the left-side pocket of your trousers to fill up the right. Moreover, as the total amount the nation spends on autos increases, it will not necessarily be of help to the national interest.

The suggestion that the American government take protective measures for the U.S. auto industry in Detroit has been alive for a while. It circulated in the early days when Japanese cars first landed on U.S. soil.

Among President Richard Nixon’s Watergate recordings, there are conversations with Henry Ford II and Lee Iacocca, the respective chairman and president of Ford Motors.

Iacocca appealed to Nixon that “[The Japanese] are gonna put whatever is demanded by law in this country on at a buck fifty an hour, and we’re, we just cracked $7 an hour.”

“The Japs are in the wings ready to eat us up alive,” Iacocca colorfully proclaimed, and Nixon agreed. So because of the difficulty Ford would have meeting safety requirements without breaking the bank, the implementation of regulations that would require safety belts and air bags was postponed for nearly 20 years.

How the tables have turned, now that the safety of Japanese cars is being called into question. Japan complains that the Obama administration is siding with U.S. automakers because of the midterm elections this year.

But Washington does not seem to heed such complaints. U.S. Senator Mike Johanns of Nebraska, who represents a state filled with dairy farmers and ranchers, pointed out how Japan banned the import of U.S. beef for safety reasons in 2003. What would Japan do if the U.S. banned imports of Japanese cars on the same grounds?

Johanns spoke for the people who think there is nothing wrong with siding with Detroit, since Nebraska’s economy had suffered from Japan’s import ban.

U.S. Secretary of Transportation Ray LaHood has said that he is going to raise this point when he eventually makes an official visit to Japan.

It seems that a looming battle over safety issues could ignite another trade war between the two.

Both beef and autos are important issues for this country, and in a fight between Japan and the United States, Korea cannot remain a mere spectator.