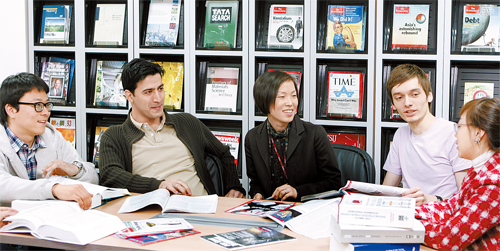 Postech graduate students have a conversation in English. Starting March 1, the university has operated as an English-language campus. By Kong Jeong-sik

POHANG, North Gyeongsang - Starting this spring semester, Pohang University of Science and Technology, or Postech, is operating as an English-language campus in which all classes, seminars, meetings, written notices, executive documents and theses will be in English.

So far, the response from the faculty and students has been positive, although some express concern over a potentially difficult transition.

Upon this journalist’s visit to Postech on Wednesday, the main building in Pohang, North Gyeongsang, had notices both in English and in Korean plastered along its walls.

“Our English-language operations start from here,” said an employee at the school’s promotional office. One notice about steps to prevent the A(H1N1) flu included Korean text with an English translation written right below it. “In honesty, there is a lot of stress [among professors and students] about English. Maybe it is time for people like me to leave this school,” the employee said.

Postech started this new English campus system on March 1 as a part of its effort to globalize. During the matriculation ceremony this year, all speeches, including the president’s opening talk and the freshman oath, were in English. School officials said that while most parents didn’t understand much of what was said, they believed this was the right way to go to become a top global school.

Last month, the school announced that it will invest a total of 50 billion won ($44.2 million) for three years to scout 10 Nobel Prize and Fields Medal laureates to lecture there.

“As we have brought in many distinguished scholars from overseas, we have the strength to compete with other universities on a global scale,” said Baik Sung-gi, Postech’s president.

The university’s upcoming teachers’ conference with 247 professors will be conducted in English. The school will also include a foreign professor on its globalization committee.

Many at Postech agree that the transition will take some time.

“I think students understand around 70 percent of the English-language classes,” said Kim Yong-seok, 44, an industrial and management engineering professor at Postech. “Compared to students in the U.S., who ask questions [during lectures] quite aggressively, Korean students hesitate to ask any questions and this should change.”

Although many students this year say that the change is for the good, some express concern about their English ability. “My listening and writing skills in English are not great. I plan to improve my English, though,” said Goh Dong-gun, 21, a sophomore in the industry and management engineering department.

“It is frustrating that I can’t understand English well but I’m adjusting slowly,” said Jung Hye-yun, 19, a freshman in the computer science and engineering department.