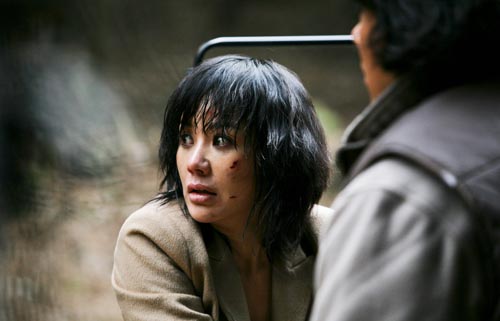 
Korea’s entertainment industry experts love to nickname local stars after Hollywood celebrities. It’s a surefire way to attract the public’s attention. A young teen in an idol group who can dance and sing might be called “the Korean Justin Timberlake” or a skillful child actor who can burst into tears on demand is dubbed “Korea’s Dakota Fanning,” even though Fanning is all grown up now.

These would-be stars often fail to live up to their namesakes. But Eom Jeong-hwa - known as the “Korean Madonna” - may be the exception. Eom is unafraid of transforming herself for a screen role - her characters have included a devoted wife, a lesbian, a single woman who wants to have a baby - while on stage, she sings disco with her hair in a bob, wearing skin-tight leather tops and shorts at the age of 41. She also loves to stir up controversy: Eom was the first local singer to appear in public in her underwear.

A favorite of the public and paparazzi alike, Eom has been an A-list screen darling for almost two decades, and she has 10 albums under her belt - every one producing at least one hit. No other Korean star has juggled acting and singing careers as successfully, or for as long, as Eom has.

This spring, Eom plays the role of a hysterical author involved in a plagiarism scandal in her new film “Bestseller,” to be released next month.

In order to play the role, Eom, who calls herself a gourmet, went on a diet and shed about seven kilograms (15 pounds).

“I’m not the type of person who easily slims down, but I had to do so to add reality to this nervous and hysterical character, because people who often get stressed out or sensitive are usually thin. So I walked on the treadmill for 100 minutes per day and ate protein instead of carbohydrates,” Eom said at a recent press conference in central Seoul.

To see her in this role, it’s hard to believe the soft-spoken and amiable Eom was once a regular in romantic comedies. The effort to expand the scope of her film career began when she played a serial killer in “Princess Aurora” in 2005. That film convinced Bestseller director Lee Jeong-ho that Eom was right for the job.

“I think Eom is the best and smartest actress in Korea, interpreting and understanding her roles better than other Korean actresses,” he said.

Although Eom still feels more comfortable with romantic comedies, she said she was hooked by the script of Bestseller after reading only a few pages. “When I do romantic comedies, I feel like I’m loved by many people, and it makes me feel good. But I think there is a different level of pleasure when I film thrillers. My eyes and facial expressions are gloomy and dark when I do thrillers,” she said.

“The action scenes were really tough but really fun. I don’t think I’ll be able to forget the moment when I climbed up to a rooftop wearing seven-centimeter (2.8-inch) high heels. The director might not know, but I cried on the rooftop,” Eom said, laughing.

Eom’s co-star Ryu Seung-ryong, also at the press conference, predicted the film would be a turning point in Eom’s acting career.

The actress herself was less sure.

“The audience will judge whether this is going to be my turning point or not, but one sure thing is that I found myself enjoying every single scene during production,” Eom said.

Bestseller is slated to open on April 15.