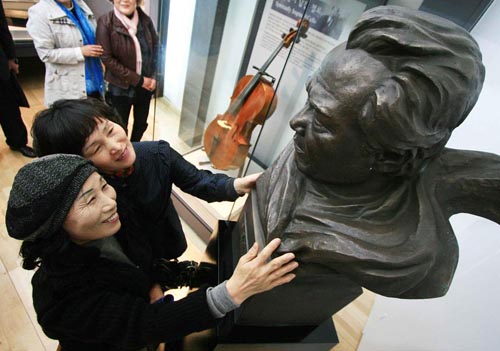 Some 500 local citizens as well as Yun’s daughter Yun-jeong and his brother Dong-hwa attended the opening.

“It feels like father’s spirit has returned here,” said Yun-jeong at the ceremony, while shedding tears.

The exhibition hall displays Yun’s artifacts in chronological order with explanations in both Korean and English - which can differ, with more details given in English, because of the sensitivity of the allegations that he spied for North Korea.

The 170 artifacts range from the world-renowned composer’s cello to various personal possessions, including his passport, a miniature Korean national flag he carried in the pocket, hand-written letters and cards to his families and musical scores.

Also on display is the bust made in North Korea, which took nine months to make its way here and win government approval.

The bust was sent from Isang Yun Music Institute in Pyongyang, but South Korea’s Unification Ministry delayed approving its import because of opposition from the National Intelligence Service, the country’s spying agency.

A month before the importation, the North conducted a nuclear test, causing the South Korean government to restrict any goods from the North. The sculpture was initially made with permission from the Unification Ministry, according to the Seoul-based Isang Yun Peace Foundation.

Yun, who was born in 1917 and died in 1995, fought for Korean liberation and was imprisoned by the Japanese in 1943. He first visited North Korea in 1963 and returned several times later. He was abducted from Berlin in 1967 and taken to Seoul by the Korea Central Intelligence Agency, the predecessor of the NIS, under allegations of espionage for the North.

He was initially sentenced to life imprisonment but was released in 1969 following strong international protest from supporters including fellow musicians such as Igor Stravinsky and Herbert von Karajan. He sought political asylum in 1971 in Germany and was banned from returning to Seoul Korea permanently.

The park in his honor, Docheon Theme Park, was established on 6,437 square meters (1.6 acres) in Docheon-dong in the marine city, adjacent to the coastline. It has a modern-architecture museum with a 100-seat recital hall on the first floor and a collection of Yun’s possessions on the second.

The complex includes a small outdoor stage and an artificial pond with walkways ideal for strolling around. The city of Tongyeong spent 8 billion won ($7 million) building the park over the past eight years.