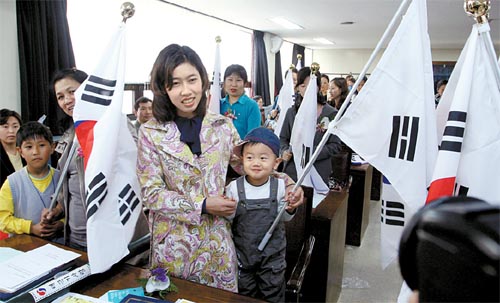 Jangheung County, South Jeolla, has embarked on a campaign to help foreign spouses of Koreans, like these marriage immigrants shown after being naturalized at the Seoul Immigration Office, adopt Korean names. [JoongAng Ilbo]


Lorita Biwadwachan, a 48-year-old Filipina woman, married a Korean man 14 years ago in Jangheung County, South Jeolla. She recently changed her Filipino name to a Korean name, Lee Hyo-ri, after the popular Korean singer, at a local administrative affairs office in her neighborhood. She said she decided to take her husband’s family name, Lee.

“I wanted to keep my Filipino name, but I sometimes encountered uncomfortable situations because of my name before and I decided to change my name to Korean after I heard court and county offices in my neighborhood are helping marriage immigrants get Korean names,” Lee said.

Lee said her Korean friends and neighbors had a hard time pronouncing her Filipino name, and when filing administrative documents at public service offices and filling out documents for her children’s schools, her name was often too long to fit in the space, because the Korean system was created for Korean names, usually no longer than three or at most four characters.

Of the 71 marriage immigrants living in Gangjin and Jangheung who have obtained Korean citizenship and decided not to change their names, 41 percent of them have now changed their minds and have opted for a Korean moniker, the government said.

Yet some of the new names are more conspicuous than others. Many choose the names of celebrities such as Lee Hyo-ri, Jeong Ae-ri, Lim Ye-jin and Gil Eun-jeong. Immigrants changing their names are also required to register a “clan origin” area. Since their ancestors are not Korean, most - including Lee from the Philippines - choose their current residence.

“The primary reason for marriage immigrants to decide to change their names is concern about their children,” said Baek Jeong-min, a family affairs division official at Gwangju District Court’s Jangheung branch.

Kim Na-yeon, a Vietnamese marriage immigrant who first came to Korea in 2004 in Gangjin and become a naturalized Korean citizen in 2007, said she decided to obtain a Korean name because her son will enter elementary school next year.

“I changed my name because I didn’t want my son to be bullied by his classmates because of my name,” Kim said.

Other counties are following Jangheung’s lead.

Lee Seong-guk, an official at the Haenam County family welfare division, said among 403 marriage immigrants, 131 marriage immigrants have already obtained Korean citizenship, but many of them have not opted to change their names.

South Jeolla’s 22 cities and counties are home to 6,492 marriage immigrants, and 27 percent, 1,749, have obtained Korean citizenship.

The largest groups in the province among foreign spouses are Chinese, with 2,069 people, and Vietnamese at 2,055, followed by Filipinos, Japanese and Cambodians.